The Constitution pretty clearly states that we have the right to bear arms, but at least here in MN there is already a lot of paperwork that includes a lot of information to the government involved. I wonder why the MSM and the left finds  the government listening to a cell call to a known terrorist number to be "a chilling infringement of constitutional rights", where the government gathering all kinds of data on a law abiding citizen exercising a specific constitutional right to be just fine? In fact, I strongly suspect that when the Democrats move to restrict that right even more in '09 or so, the MSM and the left won't find that "chilling" either. We decided that it was time to arm while the arming was good.
Anyway, we now have a Beretta Tomcat .32 cal and a Springfield XD 9mm in the family arsenal. We picked up the 9mm today, and since it was warm we went out to the range and did some shooting. I was really surprised at all the handguns being shot out there today. This was the last of this model that they had at the local gun-shop, and when talking over at Cabella's as we were getting the Beretta, they said that they had broke all records for handgun sales in '07.

The 9mm Springfield is a gun that puts an instant smile on your face. At 25', the first clip easily and comfortably all ended up in the plate, and it just got better from there on in. It is an extremely sweet little weapon with a 14 shot clip as one of the clips included. The gun is reasonably compact and light, but enough size and heft to make the 9mm recoil extremely manageable. I'm thankful that a buddy of mine let me shoot his .40 cal Springfield so that I was familiar with the piece, and a conversation with an ex-Marine Gunnery Instructor that works at the shop part time convinced me that 9mm was just fine for any potential defensive use that I might ever have for it. It is a gun that inspires instant confidence that rounds can be placed where you want them to go, it has a lot of capacity, 9mm ammo is relatively cheap and easy to get and the Springfield double safety system is hard to argue with. A great gun. 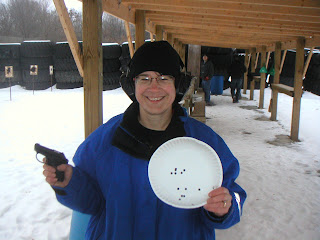 The Beretta .32 takes a little more getting used to. Ours has a Crimson Trace laser grip that is a nice addition to a weapon that may be used for self defense. Since the gun is smaller and lighter it is harder to shoot accurately, but after putting 100 rounds through it, my wife was able to shoot a couple of very nice groups at 25' as you can see from the picture. The potential to carry it in a purse or pocket much is of course the advantage to the small size and light weight.
I've only shot handguns a couple of times in the past and was surprised by how much fun these were (especially the 9mm). Since MN is a Concealed Carry state, we planning to avail ourselves of that right before the chance is passed forever. I still remember how crime was increasing rapidly in the 60's and 70's. I would hope that we would not return to those days (or worse), but one of the things that the left likes to do is remove the freedoms of law abiding citizens while reducing penalties for criminals and those kinds of policies often have predictable and unfortunate results. No doubt they will try to remove the rights of existing permit holders as well, but there is some chance that they might compromise at some "grandfather clause" for at least awhile.
In any case, it was a fun day and I'll have something else to do with my "spare time" as the weather warms this spring.
Posted by Bill at 10:16 PM

Email ThisBlogThis!Share to TwitterShare to FacebookShare to Pinterest
Labels: guns