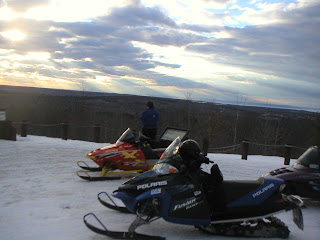 My wife and I returned a bit after 11PM last night after a 3-day whirlwind end of the season snowmobile trip with another couple that was overall great fun and just a "tish" on the "doing a whole lot in a short time" side.

We took off at 9:30 Thursday AM in two vehicles with two sleds in each unit and rolled to Ashland WI, arriving at a bit after 2 even though we were slowed by some difficulty getting trail permits. It was 55 degrees and there was some group question of how good the trails would be, so we had a nice leisurely lunch at the Best Western Holiday House in Ashland that we were staying at. Take a look this Google Map with points of interest included.

We finally got up to the Pub and Grub West of Washburn and on the trail just before 4. There were a lot of slushy areas, some plain old nasty mud and water in some areas, but there were also some really nice areas with long stretches of perfectly smooth and fun to ride stuff. We made it up to Herbster for some sodas, then drove down to "Old Baldy" to get a nice overlook in without having to brave the cold winds that are often the case up there. Made it back to the Pub and Grub shortly after 7, just barely dark for around 70mi for the short day. Had an excellent meal there and reached the conclusion that since were this far, we just had to go up to the Keweenaw and sample the conditions there.

Spent a short night at the hotel and hit the road at 7AM. By 10:30 we were unloaded at Krupps in Twin Lakes and out on the trails. The conditions up there were FANTASTIC ... generally perfect trails on the 13 loop down to Greenland. We cut off on the "newer tail" just N or Mass City off the Nichols (20?) and had some very high speed running over to N of Sidnaw. I discovered that in order to keep up with my wife on the '97 500cc Classic with something like 60 HP with my 120HP '06 Fusion HO I had to put some more throttle in it. She claimed 85, but I looked down and was floating over 90 catching her.

We had a bit of trouble stopping for gas enough-we ought to have gassed up in Greenland, but we came to the conclusion that we had to go down to Sidnaw and fill up. We came back N and ran "the whoops" heading toward Baraga-a series of quick rises and drops on a very straight run in which it one tends to get a little high-speed air or at least very significant track unloading. We OUGHT to have just reversed our course back out of there on the newer trail back over to the Nichols, but fell to the siren song of "maybe the trail to Alston will be improved, everything else has been so good"--well, it was in as good a shape as it probably could be, but narrow and super-twisty still gets long.

Stopped in at Krupps for tasty Pasties, took a spin N to S Range and stopped in front of the John Dee trail cam and found out there is no gas in S Range anymore, so rather than taking a shot at the Freda Loop we drove back down to Krupps, loaded up and headed in to the Ramada at Hancock. Had a decent (but not special) meal at the hotel a couple of beverages, and turned in fairly early.

Saturday we hit the road at 7:30 (central time, never changed to the UPs Eastern) up to Phoenix where we parked and unloaded. The trails were SUPER ... we were the first sleds out on a groom that had set up better than it usually does up there, they must have gotten the groomer out early. The temp was around 20 and the amount of snow is incredible -- no signs of spring up there. We ran up to LacLabelle and found that they no longer do any coffee / rolls stuff there, but have the bar/grill only that opens at noon.

Shot over the mount Bohemia and then N for Copper Harbor. Discovered that the trail out to the tip of the peninsula was fresh groomed for the ONLY time in 10 years of going up there that I have seen it any better than a kidney liquefying mass of moguls. It was perfectly groomed with no tracks so we went in and met the groomer coming out. I ought to have backed up, but thought I could get by him parked and banged up my knee and foot a bit, but nothing that seemed serious at the time ... little stiff and black and blue today, but able to walk and work out, so hopefully nothing.

The end of the peninsula is pretty cool with wind and waves coming in and a lot of hunks of ice grinding together. Standing there it hit me that if things work out well I'll be standing on the Santa Monica Pier in two weeks watching the Pacific waves crash in. Full scale winter in the center of the continent on sleds to "summer" on the W coast--naturally, it would be possible to just run the sled down to the Keweenaw airport, hop on a plane and be there in something like 5 hours, but two weeks is enough contrast for me.

We continued on to the top of Brockaway Mtn to look at the steep drops, feel the high winds and see the view out over the very cold Lake Superior with lake effect snows swirling around. Then down to Copper Harbor to the Mariner N restaurant for some good sandwiches and soup for lunch. Back on the sleds, over to Eagle Harbor to stand on the observation deck next to the lighthouse for another view of the "ice water mansions". I've been up there in early March when one could lay back on the already melted bench and catch a nap-not this year, it would be a chilly and windy nap.

Drove the sleds down to Phoenix, loaded up, fired up, and headed south at 2:30 central. Not a lot of moss grew on us as we motored toward home and walked in at a bit after 11PM, tired but happy to have had a fun little adventure with the sleds to end the season.
Posted by Bill at 2:42 PM

Email ThisBlogThis!Share to TwitterShare to FacebookShare to Pinterest
Labels: snowmobile