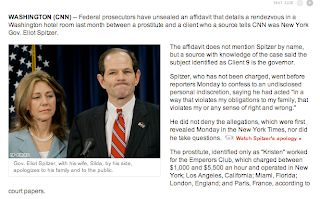 Time again for a game of "D or R". Under my rules, if the party designation doesn't appear prominently in the early part of the article and it is a D, I win. If it does appear and it is a D, or it is an R and fairly hard to find, then the MSM wins and gets a point for being "surprisingly unbiased". Looks like today is a losing day for the MSM. One has to dig pretty hard to find the D.

I'll go out on a limb here and guess that based on the look from Mrs Spitzer's face, last weekend wasn't all that hot a weekend for Eliot. Probably not a lot of favorite foods, drink delivery or "cuddles". She really needs to give Hillary a call. When one talks about "experienced", dealing with husbands that follow the liberal view of "fidelity" is an area that Hillary truely knows of what she speaks.

I don't see the issue here; it certainly doesn't make him a "bad Democrat" does it? Barney Frank was LIVING with the male prostitute. Did Eliot fail to pay minimum wage or smoke during his "business arrangement"? Now those MIGHT almost qualify him has a "bad Democrat". Maybe that is what they are investigating.

My take on this would be that it must be the evil Bush administration "peering into bedroom windows" yet again on an issue that is clearly "only about sex" (and hopefully appropriate union based hooker living wage of course). We have just got to get this evil administration out of there so Democrats can start having their way with the hookers and the taxpayers -- er, I mean "focusing on the nations business".
Posted by Bill at 8:09 PM