The Wilson Has Landed

My long awaited Wilson arrived last week, so I now have a true 1911. My step is more sure, my back straighter, my gaze more direct. As US servicemen knew from 1911 to 1985, there is nothing as positive for the good of man in this mortal coil than the grip of a true 1911.

I took my Para Tac 4 hi-cap, LDA trigger out to the range for comparison. The only way to truly savor redemption is to face that which you have been redeemed from -- the Para is a fine weapon, at one level not a thing wrong with it, having 13 rounds of .45 vs 8 might come in handy. The fatal transgression is to believe that the metaphysical merits of the true 1911 could be bestowed by a double stack completely unrecognisable as a 1911. My handgunning soul has been redeemed, and I am free, truely free as only a real 1911 owning American can be, at last.

One beholds the Wilson with a sense of humility. Although the first outing was far and away my best first outing with a new firearm, including my best groups ever right out of the box, I realise this is a weapon that I will never do justice.  I have some concern of being apprehended at the range by some life NRA member for possession of a firearm in excess of my demonstrated skill level. I'm not exactly sure what the penalty would be, but after one outing, I'd say that even if it were death, it would be worth it -- providing it would be "death by Wilson". If one must die by gun, it may as well be by the very best.

The target above is 10 yards, first center group from the bench, second upper right standing free hand. My tendency is to shoot low and left -- improper trigger control, a personal failing that the Wilson can't correct completely, but one which it VASTLY improved right out of the box. We put about 150 rounds through it. One of my buddies had a F2F on a Chip McCormick mag, otherwise completely flawless. As anyone that has dealt with new guns, especially 1911's, that is incredible -- usually it takes 500-1000 rounds to get them out of the finicky stage. Winchester white box, Blazer brass, and Remington ... all hardball.

Naturally, since it was my buddy that had the F2F, I won't consider the potential that he "limp wristed" it.

I'm completely happy. Great gun to just admire, even better gun to enjoy shooting for a lifetime and then pass it on to the next generation. 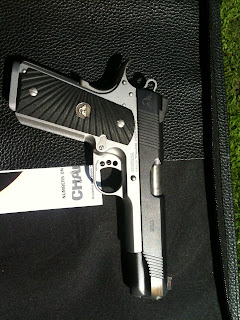 Email ThisBlogThis!Share to TwitterShare to FacebookShare to Pinterest
Labels: guns