Remember when showing pictures of grieving military families and the caskets coming back from overseas was an extremely high media priority? Remember when each and every loss of a solider was front page news, and when it was in your state, it was both local and national news?

This completely proves that for the left and the MSM, the "anti-war" posture was COMPLETELY politically motivated. Whatever their protestations, they care not one whit for the actual troops -- BO could slaughter as many as he wanted in any way he saw fit for a good long while and they would be silent or even cheering.

Take a look at the following and then try to recall when the last time you have seen ANYTHING on troops lost on Afghanistan? Can we really be SO BRAINWASHED that we as a people get whipsawed about by an MSM intent on bringing down W, so hammering the pain of each casualty home in searing headline reports, yet INSTANTLY putting on a virtual news blackout of loses as BO takes power.

If electing BO a 2nd time didn't make it obvious, this clearly should. We have COMPLETELY lost our ability to govern ourselves.

499 soliders lost in 2010. A congressional election year. I never knew. Each 1K milestone under W was a "story of the week" for the MSM. Casualties in Afghanistan were especially bad ... because W had "taken his eye off the ball" there, and was busy "fighting the wrong war". Kerry and then BO promised "we can do better"! They were COMMITTED to WIN "the right war".

310 Americans lost last year. Be honest, did you have ANY idea??

1577 lost since BO took office. Remember when Kerry was hammering on "who will be the last man to die for a lost cause in Iraq"?  Well?? He is Sec of State now!! Are we "winning" in Afghanistan? Does anyone even care??

"Better" meaning drastically INCREASE casualties with no evidence of increased success against Al Qaeda or the Taliban? I only thought of this today because I'd seen some postings on FB of units that had been especially hard hit the last couple months in Afghanistan and had lost 5 and 10 guys in very elite tight knit units -- they were asking for help and for people to take notice.

I'm ashamed. How hard it is to pay attention to "absence of evidence" and to realize it complete is NOT "evidence of absence". We are ALL, me very much included, so very easily led by the MSM that it is completely humbling and VERY disturbing! 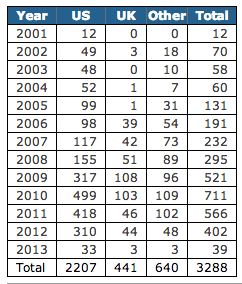