For the first time in quarter century, I'm not doing any fishing in MN this opener. For 45+ years I did an opener either here or in WI, where the opener was a week earlier. During that time there was never an issue with ice on any of the lakes that I opened on -- this year, there was, and would definitely have been had I gone to WI.

I listen to MPR pretty much every day, there has been VERY little discussion about all the records being broken this year, where last year, the early and warm spring was a CONSTANT discussion, often with a little quip thrown in of "how hard it must be to be a "denier". 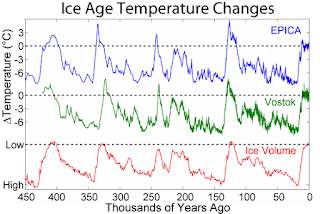 The best that science can tell us is that the CLIMATE of the planet has shifted between periods of warm and cold for at least the last 2.6 million years, and we are in fact still in an "ice age" called the Pleistocene.

The chart shows evidence from antarctic ices cores over the past 450,000 years. If people like to think about the "big picture", this chart brings a few thoughts to mind:

Anyway, enough on the bigger picture for today. This has been a cold spring in MN, but NOTHING like what we have seen here around 12K years ago with a mile thick sheet of ice, so we ought to be VERY thankful for just a little lake ice!