"There are no “things like this,” beyond a coincidence of bad timing. But they do have one thing in common: when bound together and loudly denounced on cable television and in hearings, they serve to obscure the real damage that Republicans continue to do to the economy and the workings of government.

The sum of current information from Benghazi, IRS, Gun Runner, appointment of Czars, AP records, BOcare, attacks on the 2nd Amendement, and on, is "no things like this" ... get your eyes back on the evil of the Republican menace -- they still control the House, dammit!!! They are the ones doing all damage, BO is doing all good. That is all you need to know!!!

This is the NY F&*ing Times !! This is supposedly our "Paper of Record". I listen to NPR, the view from there is pretty much identical!!!

Here is a little different view. 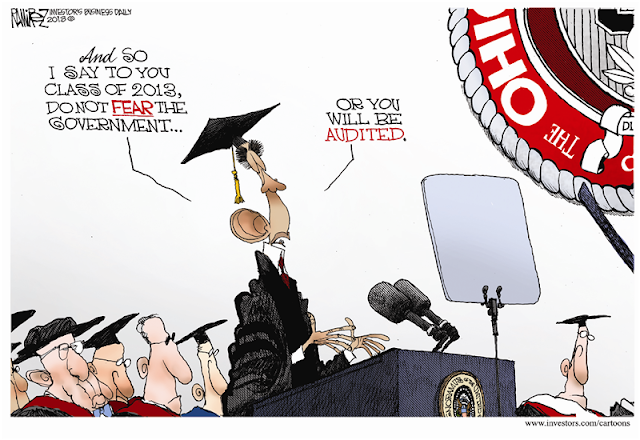 I don't care which side you are on, and in today's world,  you ARE on a "side", if you want to have ANY semblance of understanding of the "real world", you MUST make sure your media diet is balanced! I can't do it, no Blog will do it, and to some degree it is nigh on impossible since we are ALL extremely biased. But without at least attempting it, you are a UNWITTING slave to the world view of others. You are doomed to not even really know what you are thinking!

FIRST, be aware of what your overall World View (WV) is. You DO have one of these in some combination of their many many forms  ... you just may not be aware of it, or in fact, even think you hold the other view, but really do not:
In the past, I've waxed on and on about these items, and in some respects, every novel in history, the Bible, all governments, all arguments, and all my blog entries are really just variations on the above at different levels.

What Civilization (as in Western Civilization, a bunch of shared ideas that applied to many nations) and American Culture (those aspects of Western Civilization that were distinctly American) used to provide for us was a set of consistent and reasonable values all driven from WV1 that were codified in written laws and the vast majority of people at least loosely agreed on; "Ten Commandments, Constitution, Apostles Creed, Rule of Law, Contracts, Golden Rule, etc".

**NOTE**, the political "left and right" DO NOT correlate to WV1&2. I see the WV as the Y-axis and left/right, or "Control / Chaos" as the X-axis. MANY of the WV2 folks are hard over on CONTROL and want the State to demand that you see things their way -- as in BOcare, "Hate Speech", Auditing your enemies, etc. In fact, I'd argue that the reason that the NYTimes sees no "scandal" here, but rather only a temporary smokescreen for Republican evil is just that -- they are angry that their (and the governments) level of control is yet insufficient to stamp out the voices of the apostates.

So we fight. It takes not much thought to realize that WV1 reached it's pinnacle in say "1900" in the US, and has been in decline ever since. WV2 hit a pinnacle in Stalinist Russia, Hitler's Germany and Mao's China ... along with lesser states like Cuba and Venezuela. North Korea is it's current poster child.

Islam is an interesting case where WV1 with Islam as the specific religious view  is combined with the far left of Control /Chaos. Powerful and dangerous. The following is how I see Politics and "Religion" (WV) mapped out in the past and current world. Green is optimum, yellow is desirable  red is some combination of undesirable and unsustainable.  WHICH religion certainly matters -- I'd argue that you can't have Islam in the upper right quadrant. 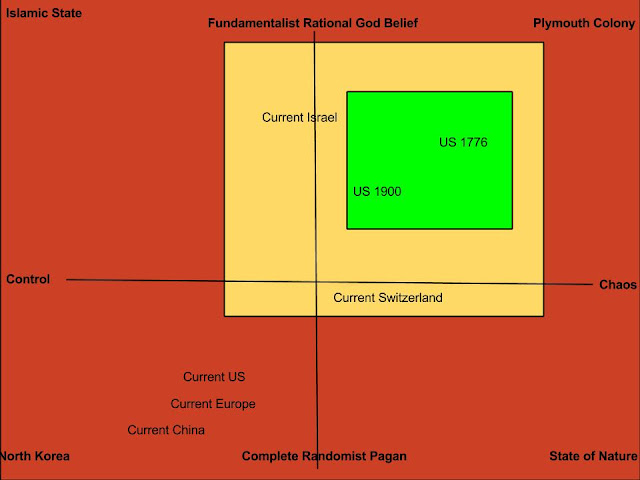