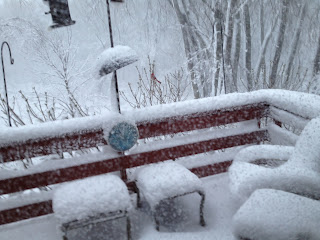 Here we have a shot of our back deck this fine May 2nd AM. Were it not for a set of control freaks trying to use "science" as a religion in order to control the behavior of people, we would be able to just "talk about the weather" as man has done since he could communicate.

"Weather", like "shit", or "death" just happens. It is NOT like taxes ... taxes are actually under mans control and in even our natural social state up to a few hundred people living in a "tribe", there were no taxes. We have gotten so stupid, we seriously need to go back to basic definitions.

Science is about making ACCURATE predictions about phenomenon like climate and weather and then using MEASUREMENT to verify that the predictions match over LONG PERIODS OF TIME. A theory named "Climate Change" can certainly explain everything, which means it explains nothing. Predicting the climate will change is like predicting that the value of the stock market will change. If it is anything, it is religion.

SUCCESSFUL religion however is something that can be used to explain life from a transcendant perspective. Christianity has been around for 2K years and is one of the main drivers of what we used to call "Western Civilization" -- what gave science the gift of seeing an ordered and understandable universe. Without Christianity it is extremely doubtful if science would be any where near to the level of capability they were at before they began their "post modern" decline.

Snow in May is just that, snow in May. This will be our "ALL TIME record snowfall" here in Rochester, but of course that is absurd. We only have records for at best 100 years, which is a TINY amount of time even from a young earth biblical fundamentalist view. From the view of any good scientist, it is laughable ... this spot in MN would have been covered under over a mile of ice for tens of thousands of years at intervals of 10-20K for at least a few million years. "Snowiest on record" ... what a crock!

What we have misplaced is our place in reality and the universe. We are either pitiful little globs of protoplasm, here for but the blink of an eye in a purposeless cold random universe, or we are eternal souls, created and loved by a God whom wants us to be with him for an unimaginably wonderful eternity.

What we ARE NOT is some self-appointed deity that has any clue what is "natural" for either a God created or random accident of a universe, planet, etc. It snowed in May. It may snow in June -- the only month it has NOT snowed somewhere in MN even in our puny record keeping is JULY! Get used to it. It is EXACTLY as interesting (or not?) as last years record highs!
Posted by Bill at 10:48 AM