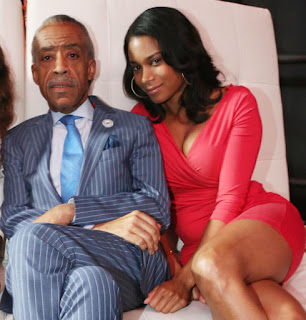 As our founding fathers fully understood, each free individual and the direction of a free nation is unpredictable, but corruption in people and nations is fully predictable. Our Founders believed that boots, powered wig or $10K suit, a beautiful young woman's effect on a man is unchanged and unchangeable. Clearly, they didn't understand how far we have "advanced". No need for a written Constitution, Rule of Law, Checks and Balances, and certainly not the scourge of religion with the perfected modern man!

The "progressive" believes that humans are infinitely perfectible -- but strangely is never able to point out exactly what model we are "perfecting toward". By removing "traditional morality", the picture of a sepulcral 58 year old with a buxom 35 year old is supposed to appear "just fine", with no "moral judgement" to be made.

It's really a test. Since you are human, your vast subconscious (some of us call it spirit or conscience) will look at the linked picture and things like "tawdry, betrayal, gold digger, shameful, etc" will float unbidden to the surface ... and if you are a male, along with that will instantly come "wow, I bet she is a lot of fun, amazing he can afford her ....". Unbidden, "just there".

I just admitted that I've not been "perfected". Members of The Party in good standing would look uncomfortably away. What a Neanderthal I am. How unsophisticated. How judgmental. Those kind of feelings are only allowed relative to somebody supporting the 2nd amendment, or wearing a fur coat, or (perish the thought) voting Republican.

Listening to "Party Leaders" talk about "the 1%" as if they were some alien entity, as far removed from their experience as "bitter clingers" to guns and religion aches with irony.

"The 1% IS The Party"!! Oh sure, they keep a couple exotic specimens of "people with money and conservative views" around to constantly show -- the Koch brothers being the current poster children. When someone says they have "a large collection", but they keep showing you only one example all the time, there might be a reason.

So a Party Boss wears expensive suits, hangs out at the exclusive Havana Club and likes to have young beautiful women on his arm. Being human is remarkably humbling if one stops for a couple seconds to let reality soak in rather than "the message" we are constantly basting in. There truly is nothing new under the sun. Or, more accurately, once the American Experiment that included Christianity in it's foundation was destroyed, we have returned to the same old ways of man.