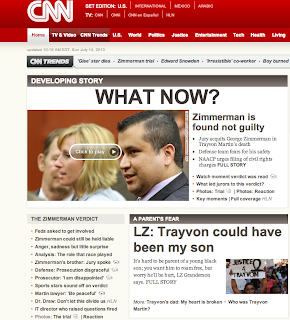 Here is CNN this AM. What now?? Federal charges? Civil trial? Just kill Zimmerman on the street??

At one time there was Rule of Law, and it was honored!! The defendant was ASSUMED INNOCENT got as fair a trial as society could muster. If the verdict was that they were STILL innocent, then they were FREE!! Done.

No double jeopardy. No threat at least from major media people that someone else may deal out a different kind of "justice" for you.

Those days are clearly gone.

What if Zimmerman had not had a carry gun or not been able to get it pulled and Martin succeeded in killing him?? It is absolutely certain that we would never have known the name George Zimmerman.
Posted by Bill at 10:04 AM