This one almost slipped by me. I've been riding the Wing much I've missed my MPR diet, CNN on the web is only barely readable with near constant headlines of grisly murders / kidnappings / sex crimes and "news" that is basically a random list of "stuff".

My sense of "the reality cover-up" with the long list of economic, foreign policy and just plain pathetic government woes is becoming very hard to ignore.

But making ado about a RODEO CLOWN, demanding apologies, people resigning and "banning for life"?? I always thought it was North Korea that had the "Dear Leader" that could not be spoken ill of, let alone mocked. 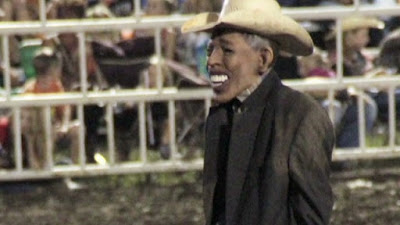 The Malkin column has a tiny bit of perspective, but it BARELY scratches the surface. Good grief, when a Republican is in the WH, 24x7 mockery and psuedo death threats is the media and left wing public rule! "Less brains than a chimp", "he ought to be assassinated (or in Reagan's case, I wish the guys aim was better", "I'd like to see him get AIDs, cancer, have his kid killed in military action, etc" ... it's endless and constant when there is an "R" in the office, and while maybe some COUNTRY group might offend their fans if they go too far, the usual is just total MSM and left wing disrespect for an R President

People used "DubYa" and "Ronnie" and "Tricky Dick" all the time, but even though Obama himself has enough sense of humor to name his dog "Bo", and makes a big deal out of not using the "Hussein" middle name, the obvious BO is generally off limits.

How is it that a country goes down the "Dear Leader" path again?