Politics, Power, and Preventive Action » Would the Syria Deal Be a Coercive Diplomacy Success?: 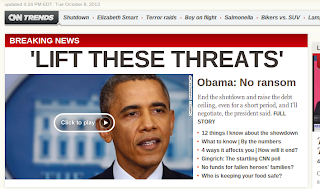 Ok, which is it? Do deadlines and threats bring about negotiation or do they not??


It was the credible threat of U.S. military action that led to the opening of this diplomatic avenue. There is no other explanation behind this rather remarkable change of position by the Syrians and no other explanation behind the decision of the Russians to seek a diplomatic resolution to the problem of Syria’s chemical weapons stockpile…I think there’s no question based on what the Russians have said, and the Syrians said, and what we know that the credible threat of U.S. military action precipitated this. And I’m not sure what other source you ascribe it to or it could possibly be.  I don’t think there any doubt that this credible threat of force has produced this change in dynamic.
Seems pretty straightforward ... yet there we have Liar in Chief BO asserting the exact opposite in negotiations with congress. It sounds like they don't have a clue, or their lies have become so common that they can't keep them straight.
I'd argue that COMPETENCE tends to bring about negotiation. If the administration had thought of brokering a deal through Putin without the abortive "Red Line" debacle, then that would likely have happened and BO and Clown Kerry might even have stumbled into looking like "statesmen".
We haven't had a budget for 4 years, for the past 3, since losing the House, BO has completely failed to negotiate. Much in the same vein as "red line", the "No talks under threat" line has put BO in a spot that were he not a media favorite it would be impossible to save face from. Congress didn't threaten to bomb the WH, they said that after YEARS of not negotiating, you have to do it prior to this deadline.
I believe every human knows that "deadlines, being under the gun, etc" DO push individuals and organizations to get busy, especially with hard things. Is that not completely obvious?
The Debt Ceiling is a DEADLINE, not a "threat" ... of Congress taking some action. It is completely INSANE that CNN even prints such drivel and some percentage of people believe that not raising a debt ceiling is a "threat".
BO is a "Community Organizer", NOT a politician. These two elements make that obvious. In order to understand what a Community Organizer is you need to read Saul Alinsky's "Rules for Radicals", or at least my summary of same. Here and Here ...
Alinsky dedicated "Rules" to Lucifer, and our current president venerates Alinsky. Need more really be said??