The Meteorologist’s Meltdown: Eric Holthaus on Deciding to Quit Flying - The Daily Beast:

I grew up in a fundamentalist church that believed that the earth being 6K years or so old was pretty much a tenet of christian faith. Believe it or burn.

So in High School I got to do a lot deeper thinking on ice ages, continental drift, carbon dating, number of impact craters on the moon, etc. The mantra of the day from science was "human perspectives are WAY too short" ... Carl Sagan loved to do the "billions and billions" a few years later and the time that humans had been on the earth was a few seconds if the life of earth was compressed to a year.

My how "science" has changed. Now 30 years, or even 1,400 years are VERY significant. Really? We know that 500K years ago the south pole was at least very nearly ice free, since that is the extent of the Vostok Ice Cores.

Polar bears are supposed to be able to evolve from grizzly bears in something like 100-150K years ... so, they lived through the last really big warming period about 125K years ago, a couple degrees warmer than now.

As always, I'm more worried about what happens AFTER those temp spikes ... no matter what causes them! I have a hard time understanding the apocalyptic thought process that gets one to stop flying on the basis of cyclical planetary worming that happens every 100-150K years with or without man doing anything.

It seems to be a short term perspective that makes young earthers look positively "big picture" in comparison. 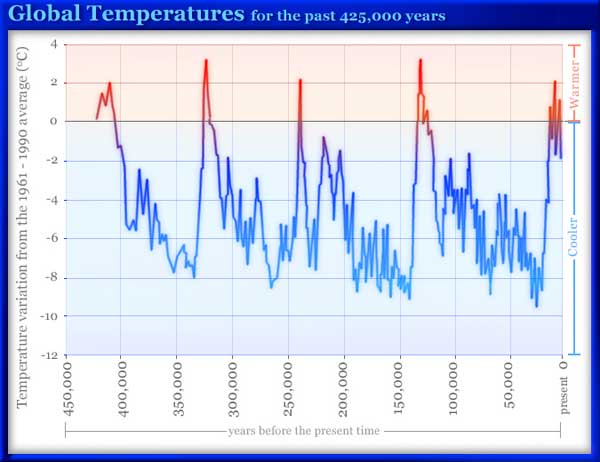