I was pleasantly surprised Sunday to see this as the banner headline on CNN: 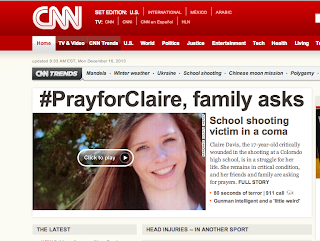 I was  very glad to see CNN request prayer for this young woman clinging to life in a coma, I'm afraid I have more imagination of the horror for her family than I would like, but the depth of the anguish gives new meaning to tragedy for those that love her.

The linked Human Events article covers the details, but essentially the MSM is at a loss to know what to say:
So a shooting that provides evidence very much in line with what the "Gun Nuts" have been saying forever goes by with the general public, MSM and left elite learning not a single thing!