No unusual shootings going on, SO, let's MAKE some negative gun "news" as a "public service" BANNER HEADLINE: 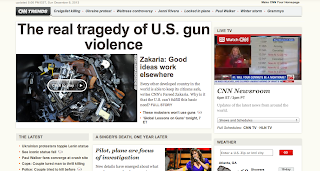 Naturally, since the facts don't fit the narrative of our anti gun story, let's make some up!


And we do have an actual experiment. In the aftermath of its own Newtown-like massacre, Australia changed its gun laws. The result? Homicides and suicides plummeted in the decade that followed. Of course, like all real world problems, the link between guns and violence is a complex issue. But one rarely has so much evidence pointing in the same direction.

Only a couple of tiny problems here:
So in fact the entire article is nothing but a lie!! But there is MORE! We make the gratuitous snarky claim that "does ANYONE think that we have 12x the psychologically troubled people"?


America's per capita gun homicide rate in 2009 was 12 times higher than the average of Canada, Germany, Australia and Spain. Does anyone think that we have 12 times as many psychologically troubled people as they do in these countries?

Note the persistence of their use of GUN HOMICIDE as opposed to HOMICIDE. Unfortunately for the news MAKERS at CNN the Time article gives us an answer:

Firearm homicides in Australia were declining before 1996 and the decline has simply continued at the same rate since, McPhedran says. (In 2002-3, Australia's rate of 0.27 gun-related homicides per 100,000 people was one fifteenth that of the U.S. rate.)

So PRIOR to the great leap forward of Australia gun confiscation, the rate was 15X in the Aussies sane advantage, but AFTER it was only 12x!! So what is "anyone" to think? Rounding up the guns caused 3 points MORE psychosis relative to US?? It CERTAINLY wasn't guns, right?? They were confiscated! But the Aussies got WORSE by 3 pts relative to the US.
In a world where sane people held sane discussions, there are LOTS of "reasonable thoughts" here:
We know this answer folks. This BANNER HEADLINE ARTICLE is 100% false anti-gun PROPAGANDA foisted on unsuspecting people who largely buy it hook line and sinker by a media bent on removing their rights under the Constitution.

In case there is any doubt of that, they point that out at the end of the article ... the 2nd Amendment doesn't mean what it says! So there!

Why is it we can't all get along? Because given the elites and the MSM, there are a large set of people playing with their own "facts", and they want to use those fabricated facts to take away basic human rights like the right of self defense!
Posted by Bill at 10:47 PM