Kim Strassel: The Really Big Money? Not the Kochs - WSJ.com:


Mr. Reid was quite agitated on the Senate floor about "unlimited money," by which he must have been referring to the $4.4 billion that unions had spent on politics from 2005 to 2011 alone,

Oh, I mean UNIONS, never mind, the Koch's were #59 on the list on the Open Secrets list they are 45th, with a LOT of unions above them.

I love this little shot of BO's top contributors -- drawn from the records because you have to say where you work when you contribute: 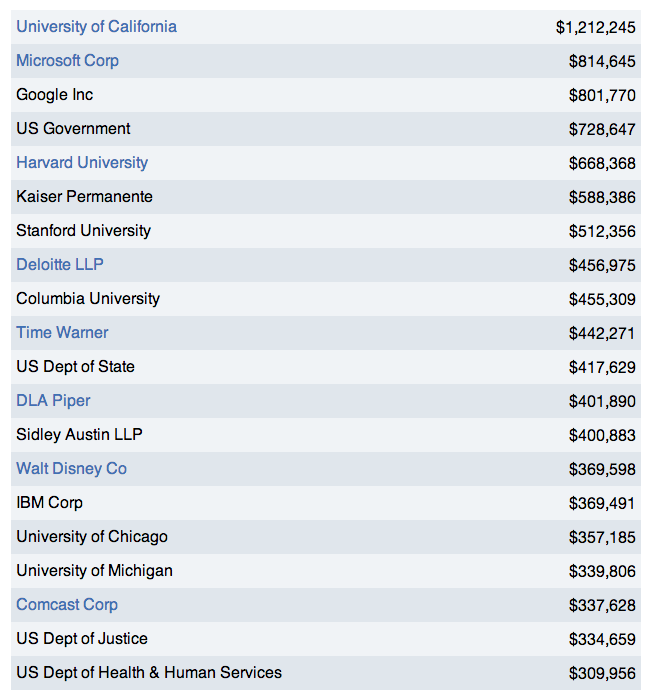 #1, University of California, with SIX universities on the list.

4 either "US Government" or specific agencies.

Microsoft, Google, and IBM in that order.

The only reason that the left hates Citizen's United so much is that it gives conservatives a CHANCE to even up the spending a TINY bit ... but they STILL have to counteract NPR, NYT, NBC, CBS, CNN. MSNBC, etc. Do you REALLY think that the IRS even cares for an instant how much money comes from where on the left? Good gravy, the people working at the government gave $1.7 M  JUST TO BO!!! On the record ... and how hard do you think any limits are being enforced on that side?

Would you bet that they are going to "go after" left leaning groups that funnel too much money into the coffers of candidates that are on their side?? It is for this reason that we ought not have ANY restrictions on campaign money and abolish the IRS meddling with a FLAT TAX.

Powerline has reported on the MANY New York Times slurs on the Koch Brothers.

Amazingly, it has gotten so over the top that NURSES in NYC are demonstrating AGAINST the Koch's giving $100 MILLION to a hospital!!

There are people that STILL claim to not understand "how could Germany have killed 6 million Jews"?

The hatred of the Jews didn't happen overnight. The blood of the French Revolution wasn't some "spur of the moment" random happening. When the Communists took over in Russia, the "wealthy" had to be suitably demonized before people were willing to see them killed. (and having them afraid was helpful too)

I wonder how many people on the left mispronounce the name Koch to be like Ed "Kaatch", the former Jewish mayor of NYC??? Apparently the "Coke" brothers are not Jewish, but the level of demonization of them makes one wonder if there isn't a desire for confusion. Democrats go in for "southern strategy", "racial codewords", etc on FAR less of a connection!

The left is going for "closure" here. They want Fox shut down, they want the Kochs to SHUT UP, and they want conservatives everywhere to get the message that they need to lie low an MAYBE nothing bad will happen to them (for now).

Mostly, we are all standing around while any semblance of political  thought diversity is rooted out and destroyed before our very eyes. Communism and Socialism ( including National Socialism) can only win when the opposition is silenced -- and they are willing to do anything to make that happen!