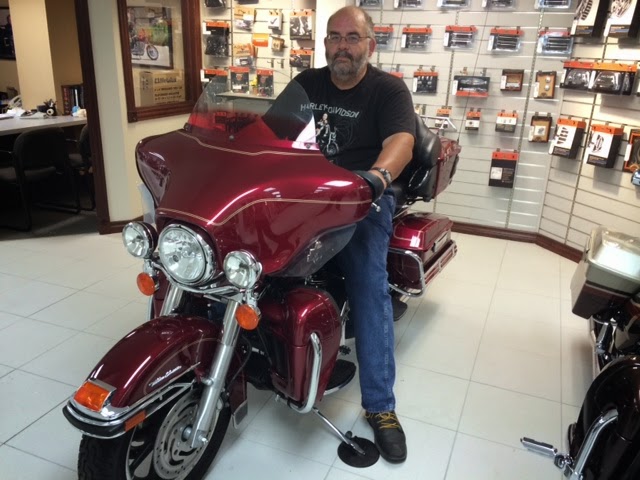 Have to admit to a bit of head spin right now.

When Marla got her Street Glide last year, we OUGHT to have traded in the 900 Kawasaki Vulcan, but we were certain that we could sell if for a good deal more outright. A year later we managed to get $100 less than we would have last year, so much for our skills in motorcycle sales!

I honestly didn't expect to be nearly as smitten as I was. I've ridden Marla's Street Glide for a good bit more than the test ride on the Ultra BEFORE the Glide had the little persons seat and bars put on it. For some reason, this baby just felt totally balanced and easy to ride right out of the chute. What blew me away was Marla EASILY getting on the back and going for a spin including a U-turn that was never all that fun 2-up on the Wing. For "around town / shorter trips / two up", it is clear that this is the go to bike right off.

Sure, it has significantly less power than the wing, and yes, it definitely vibrates -- more slow than fast, but in this year class, still real vibration at highway speeds. Oh, yes, it is CERTAINLY hotter as far as heat rolling off it, and obviously much louder -- stock. However, in my 3rd year in the Wing, for DAY TO DAY, there is maybe such a thing as TOO "smooth and quiet" on a bike. Oh, certainly not when one is riding > 500 miles, and maybe I'll be discovering that 200, 300 is a reasonable limit on this year class of HD. I'm pretty certain there are more than a few "Iron Butt" > 1K miles in a day on this model though. They may also be gluttons for punishment, which I'm not, so I'll let you know.

After giving up riding for 25 years, I KNEW that the bike I HAD to ride for a period of time was the Wing. It took more experience and tuning to get the Wing to where I really felt secure and comfortable on it  than I expected -- Progressive suspension in the front, fork brace, floor boards, etc, and it has been a superb machine. Pure performance wise in all aspects it blows the Ultra away .... BUT.

I'm reminded a bit of high end stereo, where tube amps, vinyl, and all manner of strange approaches really do yield a "sound stage" where the performance comes alive. There is some pretty good evidence that what is causing it is actually due to DISTORTION (which theoretically should be avoided), but a special kind of distortion that when interacting with the human ear and brain, produces an experience that really can't be measured by machines. Or maybe it is just imaginary -- but if multiple people hear it and enjoy it, maybe "imaginary" is OK?

The biggest difference in the HD vs the Wing is at slow speeds -- the HD feels WAY lighter than it is and perfectly balanced. The Wing feels bigger than it is -- I'm sure that there area a lot of engineering factors making this happen -- the tall but narrow V-twin vs the flat opposed six,  the belt vs the shaft twisting forces, no doubt a bunch of rake, trail, and other factors that I'm not up on. The bottom line though is that it is instantly easy to understand why so many of the city police forces use Harleys for their street cops.

Oh, I haven't lost ALL objectivity -- if I had to keep up with someone on a twisty road, I'd be on the Wing in a flash. However, since what I really want to do a good deal of the time is optimize riding experience with Marla, having us both on HDs makes that a little better, for both corner speeds and time to next break to get off the bike.

So a test drive and a ride home vs 20K+ over two years on the Wing. I'm quite sure there will be lots more learning. That is providing it ever stops raining here in tropical MN!