Hildebeast Unlike Well Off, Victim of Circus Pants

Hillary Clinton says she’s unlike the ‘truly well off’ - The Washington Post:

Hats off to Michelle Obama or staff, Hildebeast, Puuurrrfect! 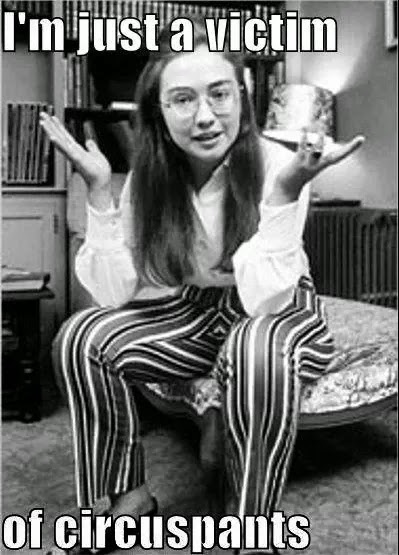 Hildebeast certainly isn't like the "standard well off" -- those with a few measly 100's of millions like her. She has been under 24hr Secret Service guard for over 20 years. Government aircraft and servants at her beck an call all the time. Not even Bill Gates or Warren Buffett get that level of treatment.

Also she is smug beyond even the inherited rich. Even they likely had to treat their parents with SOME level of respect -- Hildebeast has had a powerful husband who she can destroy at any instant because we know he as been a very bad boy. She has wielded power over wealthy and powerful people that made their money or worked their way up a corporate ladder over long and risky careers. She is DIFFERENT!

She is a force not seen on this planet since Marie Antoinette. As time goes by, I begin to understand more why the French developed the guillotine.