Why Democrats Need to Take Sides in America's Class War:

This rather long column lays out TP "gains" and strategy. The following chart from the article shows the huge "progress" of BO to date ... since '08 we have gone from a 53/25 middle/lower class identity to a 44/40 split! We are on the verge of realizing a core TP vision, America as a self identified lower class nation! : 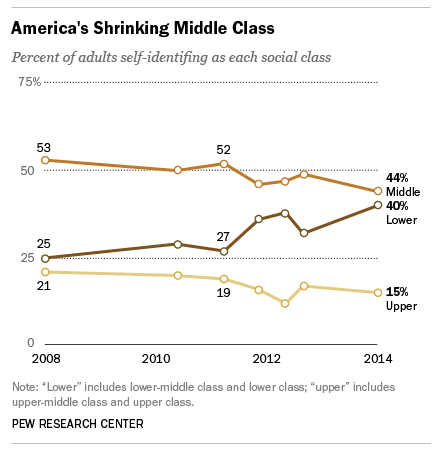 The destruction of the "middle class", "bourgeois", "American Family", etc has been the agenda of left world politics since Marx, and solidly entrenched in TP since at least Wilson. Giant gains in increasing the dependency of Americans were made under FDR, but "the plan" was screwed up by WWII ... the war energized the nation and largely returned the Americans sense of "can do, self reliance, individual responsibility, etc".

Vietnam, the Cold War, Watergate, oil shocks, Stagflation and Jimmuh Carter had us on the ropes again in the late '70s, but before Jimmuh could close the deal, Reagan brought back the old virtues and it looked like MAYBE, America might actually figure out the "progressive" trap after all -- ah, the joy of Reagan and OPTIMISM!

But now it is the left that is highly optimistic -- less people IDing as "upper", far less as "middle", and MANY more as "lower"! The ultimate goal of TP! Everyone a dependent! Everyone focused on having the  government tear some little shred of a decaying nation away from someone else! Class warfare and dependency -- the mothers milk of TP!

So the rather long article calls out the needed strategy to double down on ways to force business to pay more -- which naturally moves more off shore and increases dependence. Another WIN!

Ever increasing taxation on the upper incomes to reduce their ranks further, help increase dependency of those to whom the money is transferred, AND make it less desirable to work toward a high income! A trifecta if winning TP strategy -- punish success, reward failure, reduce a set of voters you have trouble with (the successful), increase a set if voters that always vote for you (the dependent)!

Naturally TP writers are not yet totally direct in stating this, but one doesn't have to look very hard in this column to see the excitement of a "progressive" wolf that sees the US as largely bleating plaintively for his able wolf "assistance".