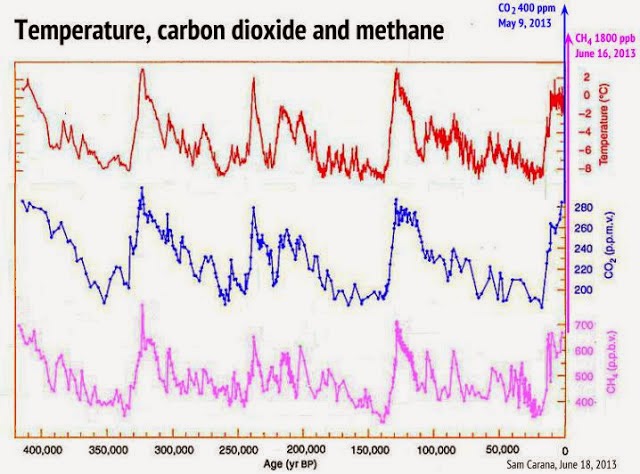 The chart is from the Vostok ice core data drilled from Antarctica. It goes back no farther because the ice melted there between 400-500K years ago.

The last time there was this much atmospheric CO2 was 3 million years ago, when seas were 80 to 100 feet higher. Since the Industrial Revolution, atmospheric methane has more than doubled, and the amount now gushing from the seas alone is 34 times what we thought just seven years ago.

The top squiggle on the chart is temp, the next one is CO2, the bottom is methane. So the article from CNN is either misinformed or lying on C02 ... it was higher 120K years ago, not 3 million, and there is an obvious pattern. Carbon dioxide and methane both rise as we hit peak temperature prior to the onset of the new big cooling cycle. It has happened 4 previous times in the last 500K years and we are clearly rising to the 5th.

Second, we admit that this loop began with us. By now, the link between fuel that jet-propels our industrialized civilization and excess CO2 and methane in the atmosphere is challenged only by those who profit obscenely from it.

Did the previous 4 rises in Co2 and methane "begin with us"? Can you look at this chart and say that this link is ONLY challenged by those that "profit obscenely from it"? I can't believe that the purveyors of the climate scare are not aware of this data. I believe that they saw these patterns and were smart enough to profit from what they knew was a natural phenomenon -- but they miscalculated how close we were to the peak -- I suspect we are now on the cooling side of the peak.

WHY do we continue to see article after article like this when the information that I have posted is publicly available on the web, easily accessible by a simple Google ... published by NOAA and other government organizations?

My view is that the reason is just as simple as the motives applied to those who "profit obscenely" -- the climate change industry has also profited obscenely -- giant fields of subsidized wind turbines and solar cells, 100's of billions in subsidies for "green energy" and countless studies, grants, offsets, etc. People like Al Gore becoming worth 100's of millions of dollars and more by not producing a blessed thing but text equivalent to the linked article.

Anyone who had basic science in school knows that this planet cycles through climate changes with or without humans and that the normal state is much colder than what we have seen in the last 10K years. I believe we are in the early stages of being rudely (and very coldly) reminded of this fact.

Email ThisBlogThis!Share to TwitterShare to FacebookShare to Pinterest
Labels: climate