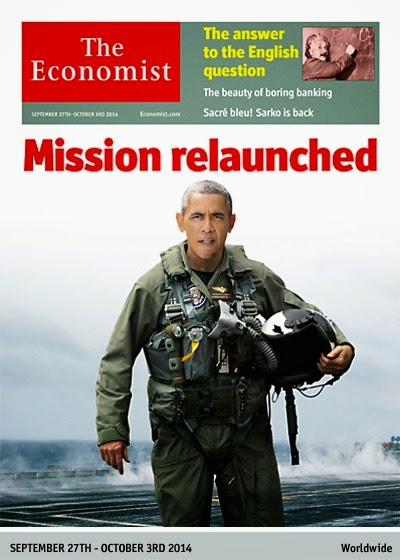 Good column pointing out that our fantasist in chief has yet again been mugged by reality. Some of the lines were downright amazing ... "Network of Death" vs "Axis of Evil". The on the job training is really really expensive and embarrassing to the apparently few remaining Americans with memories and enough brains to do some simple pattern matching.

“There can be no reasoning – no negotiation – with this brand of evil,” Obama said of ISIS after reciting a list of atrocities still unfolding where they control ground. “The only language understood by killers like this is the language of force.”

Well, DUH! Most kids figure this out after they have had their lunch stolen a couple of times or after a few times being beaten up on the bus -- apparently Barry is a VERY slow learner! Does he REALLY get it now, or is this just posturing for the sake of November? I'd guess posturing -- one doesn't really go through life as a feckless weasel and suddenly understand that not everyone is a weasel!
Definitely worthy of the read.  BO is at least being forced by events to face up to a few of the obvious realities of the world -- very late, very reluctantly and extremely incompetently as evidenced by his constant need to telegraph to the enemy what he WON'T do!
Will it be enough to head off a tragedy of 9-11 proportions or worse? There is always "Hope" -- not a lot of it, but our president having some contact with reality is much better than none!