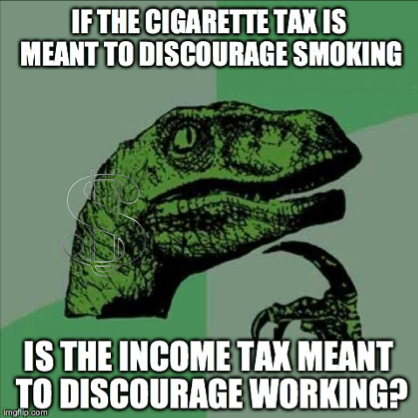 This graphic shows up out on Facebook from time to time -- it makes me wonder if velociraptors are smarter than humans.

The linked article shows that raising cigarette taxes works to reduce smoking, especially in lower income people -- the people who pay the highest percentage part of their income to smoke.

Taxes are the sledge hammer of anti-smoking efforts. The federal tax hike helped push tobacco use down to 18.9% in 2011, the lowest level on record, according to the CDCsurveys. Even smokers who don't quit light up less. In the 1990s, one of every 20 high school students smoked 10 or more cigarettes a day. Today, one out of 71 students smoke that much.

This ought not be surprising -- when prices on something rise, consumption of it goes down -- "how much" is a function of how "elastic" the demand curve for it is. Raise the price for something, people buy less of it, lower the price and they buy more -- to a point, at which the market is "saturated". The "marginal utility" is no longer deemed to be worth the marginal cost.

Income works the same. The marginal utility of the first dollar is high and then goes down as income goes up -- the next $10K of income for a person making $40K is high, for someone making $400K, it is quite low -- the "marginal utility" of the first burger you eat can be quite high if you are hungry, if you were forced to eat a half dozen of them, the last few would be a lot less. If you make $400K, the amount of time/hassle it takes to make another $10K may well not be worth what you could do with that time on your own. NOT even considering the tax effects!

You can of course use "infinite money" better than infinite hamburgers, but you can bet a $100 bribe or a $100 fine is going to have a lot less effect on Bill Gates than on someone making $10K a year. The relative nature of utility still holds.

The simple rule "If you want less of something, tax it, and if you want less of it, subsidize it" still works, and we consciously use the first half of it with cigarette taxes, yet, try to ignore the effect for income.

But you might say "you HAVE to have income, you don't have to have cigarettes".  Due to the wonders of subsidy, not even this is true -- the government subsidizes sloth through all sorts of programs, and your standard liberal/socialist believes that everyone ought to have their "basic needs" covered by the government. There is some argument about what those needs are, but food, shelter, clothing, medical care, education are almost always included -- and now usually some level of "entertainment". Cell phone, internet, tv, etc.

A major objective of "liberal/socialist" thinking is that income ought to be "basically level", so they subsidize the low end, trying to remove the "need" to work. On the high end, there is no limit to the amount of taxation they want to put on ... 100% taxes for incomes over a given amount have been suggested many times from the left.

Especially with all it's income leveling desires though, the government really does NEED money. The rational solution would be to have a flat tax on ALL purchases (sales tax)  that covered federal, state and local governments. Right now that would be about 35%, because that is the percentage of GDP in total government spending!  Going off to that link shows "the march to socialism" as the percentage spent by the government continually rises.

The ultimate result of socialism has to be slave labor (or revolution/freedom) -- those that would be likely to earn higher incomes start writing books, blogs and rabble rousing rather than creating wealth for the elite to distribute, and the elite gets really TICKED! First they start with little efforts -- use the IRS against groups they don't like, do a little "harassment" with extra regulations / etc on those that make too much money and can't shut up. Eventually though, it's always the Gulag for those that have too much gumption and don't want to  go over to the socialist side.