Holman Jenkins: Oregon Is Greener Than Thou - WSJ:

I grew up in a fundamentalist church where someone could always find a way to be just a bit more righteous -- no TV, movies, rock music, dancing, Christmas ornaments -- and of course no smoking, drinking, gambling. Skirts could always be a bit longer, dresses a little drabber ... less jewelry, no makeup. The many manners of reaching total self righteousness shift a lot, but they have been endemic to the human condition since well before the scribes and the pharisees.

It matters not what religion we are, your natural desire is toward self righteousness by the manner of the creed that we choose or fall into.

The environmental "church O the Green" (no doubt with Irish heritage),  in this case, the Oregon Diocese (to have just a bit of word fun) is profiled a bit in the linked article.


In the end, the Kitzhaber-Hayes conflict-of-interest scandal may prove small potatoes (organic), but a general point needs to be made. In our republican system of government, we don’t assume virtue. We insist on checks and balances. We require competitive bidding and similarly transparent procedures to reduce discretion and the chances of corruption. We subject regulations to cost-benefit analysis to make sure the public is really being served.

We don't assume virtue? They must mean our FOUNDERS didn't assume virtue and ATTEMPTED to have checks and balances! The Statists from TP (The Party-D) have totally taken over and the virtue of their ilk is assumed at every front. The IRS is run entirely by TP union hacks, as is the media, legal system, education and vast swaths of industry. Of course they assume virtue -- of their own, and naturally assume malfeasance from those not of their flock.

As was covered in the article linked from another blog post not so long ago, today most parents care not what religion their offspring marry into (or none), but increasingly they shudder in horror at the prospect that their beloved children would marry someone from a different political party. My guess is that with 70% of Republicans being religious, the reason their concern is higher is because the child going TP would likely indicate a loss of faith as well, so thus a double whammy if you are not of the TP religion! 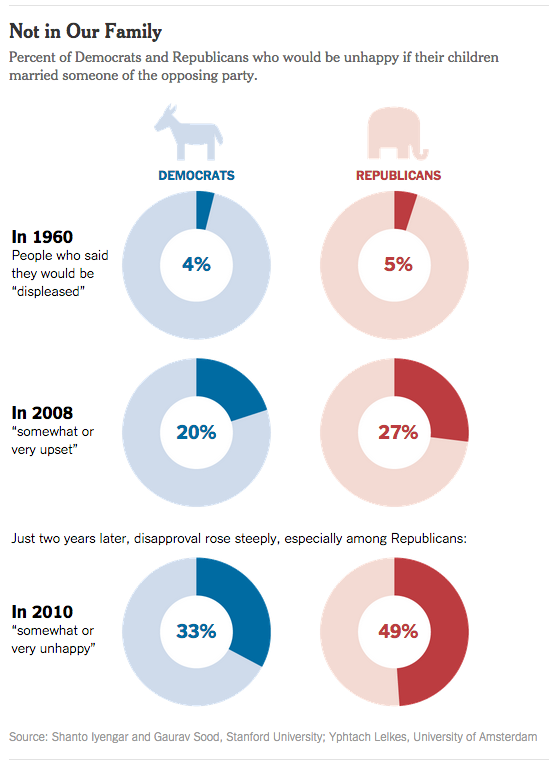 There is no more perfect measure that the national religion today is Statism -- with it's stations of the anti-cross:  environmentalism, abortion, "gay" marriage, redistribution, free sex (love has gone out of fashion), and sundry other sects and cults.

Don’t get us started on Google and its callow “don’t be evil” sloganeering. When it comes to proving Mr. Obama’s prayer breakfast point, however, give the prize to Putin's alleged funding of Western green groups to lobby against fracking.Environmentalism, alas, is a church with its reformation nowhere in sight. Jesus provided his followers the parable of the Pharisee and the tax collector to guard against sanctimony. The greenies will have to admit corruption is possible before they can do anything about it.


Guess what, Islam has not had it's "reformation" either, and an even bigger problem is that while your most likely really fundamental Christian is something like the Amish, or at least in really dark suits trying to be very loving and forgiving, the fundamentalist Islamic is looking to kill or convert you -- and the is about all the freedom they think you need.

As of now, the fundamentalist TPer is just looking to convert you -- they may fine you, audit your taxes, fire you, sue you for "hate speech" if you don't worship one of their tenets like "gay marriage",  but at least as of the moment they aren't in the killing business, or even generally in the incarceration business unless you get really crotchety. But these things have a way of only going one direction UNLESS you have some tenets like "love your neighbor", "first shall be last", "he who would be first must be a servant", etc, and even THEN, the Reformation was far from civil.

Thou shalt worship -- the issue is really only what.