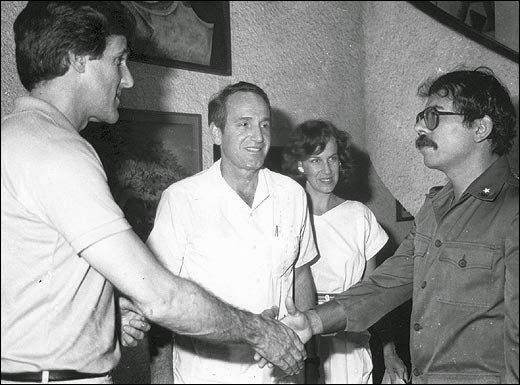 Ah yes, "disbelief". The picture of Senators John Kerry and Tom Harken breathlessly preparing to lick the boots of Communist Nicaraguan Dictator Daniel Ortega while Reagan assists the Contras, attempting to overthrow said dictator. Kerry's memory seems to be a "bit faulty" on the "he has never seen anything like this".

It is understandable, his memory, even when something has been "seared" into it, has never been very good. Even the lefty Washington Post can't ignore all his whoppers:

"I remember Christmas of 1968 sitting on a gunboat in Cambodia. I remember what it was like to be shot at by Vietnamese and Khmer Rouge and Cambodians, and have the president of the United States telling the American people that I was not there; the troops were not in Cambodia. I have that memory which is seared -- seared -- in me."

Small problem, as the WaPo column clearly points out, he was never in Cambodia, not at Christmas, not ever.

One of the features of a compliant biased press is that what 80% of the population hears is the sound of one hand clapping -- Senator's quoting the Constitution from the opposition are "traitors", Senators visiting dictators in direct opposition to US foreign policy are "courageous", "peace loving" or some other positive approbation.