The Iranians have a task forced heading toward Yemen and now we have a carrier task force heading to shadow them -- for some reason we don't seem to really think Iran's intentions align that well with our own. Strange.

Let's see, in March our nation was all up in arms because 47 Senators sent a letter to Iran informing them of how our Constitution dealt with "agreements" that were not approved by the Senate. It was BIG NEWS!

Now our "partners" in this "framework" (never mind that they have publicly repudiated the agreement) have decided to move warships toward what was once trumpeted by BO as "a model of successful BO foreign policy"! ...."successful" and BO just don't seem to go together.

My, aren't we all getting along swimmingly! How exactly might we compare the "potential repercussions" of a NOTE vs dueling task forces off Yemen? Where is the media concern? Is anyone talking "treason"? Diplomatic disaster? Does our vaunted lefty media even have a CLUE what to say? My guess is they are just waiting for BO to put some words in their mouths like the sock puppets they are.

In the meantime can't we just talk about a boat capsizing? Some death in police custody in Baltimore? The weather? ANYTHING! My my how different dueling warships are in import from a note signed by some Senators!

We seem to have arrived at a very similar point to where we were in like '79 when I thought that the USSR would have been well served strategically to lob a couple of nukes into the US or Europe and demand surrender. My belief is that Jimmuh would have gone for it -- "Better Red Than Dead" you know!

So we know that Iran would like to sink a carrier. Are they ever going to have a better opportunity than now? It is hard for me to imagine BO even getting as excited about it as he did the 47 Senator note. The "red line" for Syria is about as wee-weed up as his royal suckulence seems to get over anyone but Republicans  -- and he had to beg Vlad to bail him out on that.

One hopes we skate again, but if the Iranians want to make a statement, this is the best moment of opportunity they have had to give the "Great Satan" a real sucker punch -- and Vlad would be happy to see it happen! 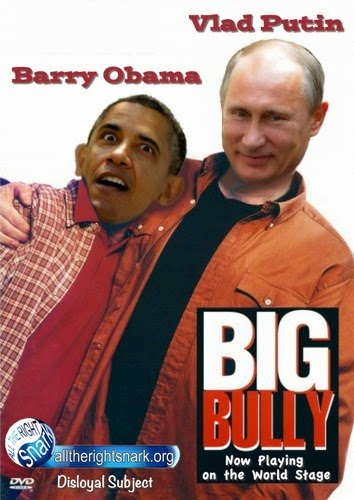