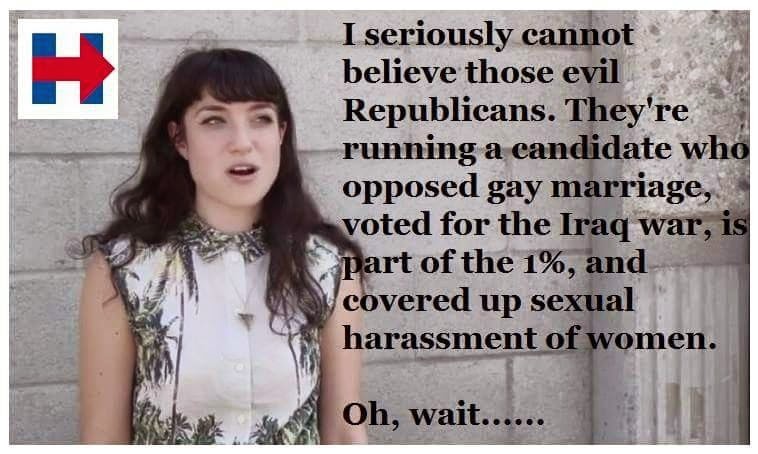 So when you are a "progressive" it is understood that lying in the service of your "vision" -- a heaven on earth where government runs everything, is acceptable ... even desirable. BO said he was against gay "marriage" in '08, but the "progressives" knew he was lying, so it was OK. So that likely explains Hillary as well for them.

Is it the same with the Iraq war? BO wasn't in the Senate yet, but he SAID that he WOULD have voted against it. Gee, that is an easy stand, right? So do "progressives" assume that Hillary voted that way because she assumed it would be a good political move? Her evidence would have been that some of the D's who voted against the first Gulf War later discovered was an expensive vote politically.

Once truth is not a significant value to a person, it becomes hard  to understand their thinking. As nearly as I can tell, neither the people of the left, nor their leadership are concerned by any level of lying as long as it is on their own side.

"Consistency" is not a virtue of the left.  Since "the latest knowledge is the best", the fact that many of their leaders positions "evolve" is seen as a positive, and makes the whole concept of a "lie" very hard to even identify except as a concept to be used against an opponent.

The "known leftist fact" was that "W lied, people died" (leftist "truths" are often slogans) when W, Hillary, Bill Clinton, Al Gore, Tony Blair, the UN, etc, etc all thought that Iraq had WMDs. We later at least thought we learned they didn't when we invaded, but it was a "lie" for W because he is not a liberal. It turns out Iraq did have WMD, but apparently not in the exact quantities or  forms that those on the left approved of.

Had W been a liberal, his position would just have "evolved" with later information  -- like BO's position on deficits, gay "marriage", or "If you like your health insurance you can keep it". No doubit Hillary's position on Iraq "evolved", like her gay "marriage" position and that is fine with the left.

But what about "the 1%"? Well, like most everything on the left, that is ideological. Kerry was worth $800 million at the time he ran and that was not an issue. Bill Gates, Warren Buffet, George Soros, the Hollywood elite, the financial mavens on Wall Street that were BO's leading contributors in '08, etc, etc are all filthy rich and it is just fine. When you are on the left, the ONLY thing that matters is ideology!

Which brings us to the "harassment of women". The fact is that if you are powerful enough and of the leftist ideology, you have carte blanche for pretty much any sin (see Teddy Kennedy drowning his secretary). So forget that.

A person of conservative thought -- who believes that facts matter, truth matters, consistency matters, and a whole lot of other strange fairy tales that the left has no use for, looks at a poster like that included and shakes their heads in marvel at how a left leaning person could possibly vote for Hillary.

It's easy -- she is the anointed candidate of the left!  That is ALL that counts for something like 50% of Americans, including 95%+ of the government union workers plus similar percentages of the media and academia.

For half or better of voters in what used to be America, this is how things work. Get used to it! We can expect it to go A LOT farther!
Posted by Bill at 7:28 PM