GOP Candidates Get 3rd Degree Over Confederate Flag, But Check Out Billary’s History With It:

To look at the news one would really think that the Democrat States of of the North, led by Democrat Abraham Lincoln defeated the Republican States of the South, led by Republican Jefferson Davis, in the Civil War, followed by an unbroken racist Republican rule of the south through Jim Crow until now. 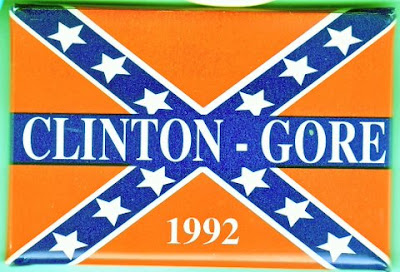 Billy C even signed legislation stating that the star above the A on the Arkansas flag "commemorates the confederate states of America" as is copied in the attached article.

Yet again we see the MSM showing it's true nature as a propaganda arm of the Democrat party. Thousands of young black men shoot each other every year and the MSM nor Democrats care not one whit -- because they don't see the issue as a political winner for them.

Crazy white guy shoots blacks and has a confederate flag somewhere? To hell with history, to hell with any semblance of reality reporting "Confederate = Republican = Racist ---> **GO**!!!"

So they run out and treat the whole confederate flag issue as a "Republican problem" -- which, to the extent that Republicans are left with the task of cleaning it up, it is -- even Jeb Bush (who I DO NOT support), who removed the offending flag to a museum in FL gets tagged as somehow "treading carefully" on this supposed "Republican issue".

This is propaganda pure and simple -- this is how the masses become convinced of things that are just not true, but they are so widely believed that great crowds can be gathered to chant "Sig Heil" or whatever the chant of the day is with great passion, but no grounding in reality.