… Already long ago, from when we sold our vote to no man, the People have abdicated our duties; for the People who once upon a time handed out military command, high civil office, legions — everything, now restrains itself and anxiously hopes for just two things: bread and circuses (Juvenal, AD 100)

Reading the Sowell column reminded me of the old "bread and circuses" phrase from the decline of Rome. The bread was the "annona" which translates as "grain dole" -- entitlements (bread) are one half of why our founders did a Republic rather than a Democracy 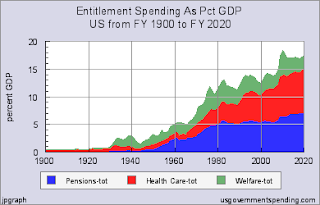 The other half was heavily on evidence in the "debate", the "shout show" format where Reality TV personalities like Trump do very well. The "circuses" that the populace demands to be entertained. As the quote above states, America is now like ancient Rome, where the populace wants just two things -- a full stomach and entertainment. There are no great visions of exploration, advancement -- even the goal of individual wealth, let alone family wealth, is heavily sanctioned and considered "selfish" and "greedy".

All are to sit back, eat their fill, be entertained, and most important of all, believe in what The Party says and do what little it says to do -- mostly just eat, drink an be merry, but occasionally get all excited over a police shooting, gay "marriage", a Confederate Flag ...or something else The Party holds up as the important topic for a week or so. "Conform Ye -- to the will of The Party" is the lead commandment.

The Sowell article asks a rhetorical question that unfortunately has a negative answer at this point.


A poll taken after the "debates" showed that, of the 17 participants, the top 5 were all people who had never run a state government or a federal agency. In other words, those who came out on top in this battle of sound bites were people whose great strength was in rhetoric.

After more than six years of Barack Obama in the White House, have we learned nothing about the dangers of choosing a President of the United States on the basis of sound bites, with no track record to check against his rhetoric?