Peeking Behind the Gas Price Curtain

The simple story is that Costco dropped gas prices in Rochester to under $2 a week or so ago and now they are being investigated by the state of MN.

The simple explanation is like pretty much everything else in the modern area of N America that used to be "the land of the free and the home of the brave" -- government. Nearly 40% of actual declared GDP, but with direct control and very substantial influence over much much more. 60%? 80%? Do you call it a "market" when you get investigated for dropping prices?

The article links off to the MN statutes on how low a price stations may charge -- the definition of "cost" is a little mini-study in government legaleze.  I'm not a government official, nor government lawyer -- nor do I get paid by various groups to make it sound like it is supposed to sound, but I'll give you my simple view of "what it REALLY says".

At this point, all the small service station owners, possibly oil companies, and perhaps even large service station conglomerates like Kwik Trip, Casey's, etc, want to keep the pump price relatively high -- most important,  the government does as well, primarily because it provides more "cover" for their fuel taxes ... now .47 in MN, and .513 in WI, the Feds are .184 of that. No doubt "environmental" groups are also happy to see fuel prices high -- to say nothing of Saudi Arabia, etc, so that is likely a secondary government interest here.

If you want to look at all this in more detail, here is a link -- it covers the strategic reserve, some history back to the '70s, how ethanol raises the price, how the US produces more oil than "most people think" (MUCH more now with fracking / ND on line).

Back in 2011, the oil companies were making record profits and they were getting about .07 a gallon of gas in profit. We heard a LOT about "big oil" and how "obscene" those profits were then ...  not so much now that they have the lowest profits in 10 years.

No doubt Bernie Sanders would find those profits to still be way too high -- he probably finds less than a percent interest to be just fine as well. He would like to put a few million more highly paid union government "workers" into even more massive bureaucracy insuring that everything was allocated "fairly" without any profit or loss motive at all. Allocate it all like the old USSR -- when everyone except Bernie and a million or so cronies and party apparatchiks has nothing, you are done!

As we continue to "progress" from freedom to tyranny, the biggest thing the "progressives" operate by is misdirection -- better known as lying. We see it in healthcare -- each new "improvement" drastically increases costs / bureaucracy as seen with gas prices. We see the same thing in college education.

Markets are messy. Without all the government involvement in gas sales, Walmart and Costco may well have cornered the market because cheap gas was a way to be CERTAIN that people were going to stop there. Possibly one or two of the convenience stores, cutting prices to the bone to bring in people for milk, eggs, pop, beer ... and making their money primarily on volume.

Or maybe one of the big gas companies would go nuts putting in fully automated small pay at the pump 24x7 stations -- who knows? Perhaps they could make a deal with an auto manufacturer or two in order to have some sort of an "automated bottom fill probe" -- drive in, park (or let something like the auto parallel park technology on some cars) position the vehicle, it reads an electronic code from your vehicle, fills it and charges you and you need never get out of the car. Possibly such a system could now be designed to check / air your tires, change your oil, wash the car, ???  In a market driven economy anything is possible because  innovation is a big winner, and complacency dies. In a command economy,  imagination and innovation is killed because nothing hates change like a massive government bureaucracy.

One by one, all the pieces of our economy are being "assimilated" by the "Borg" of "progressivism". There are a lot of "scare quotes" because we now live in a world where the echo chamber of the TP -- from cradle to grave, tells all what they are to think and hides ever more of reality behind scapegoats like "Big Oil", "Big Pharma", etc -- while behind it ALL, pulling the strings like that fake Wizard of Oz, we find the ever expanding government. 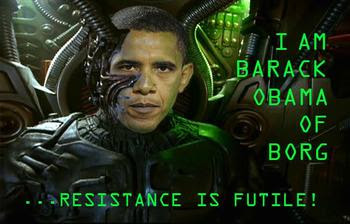