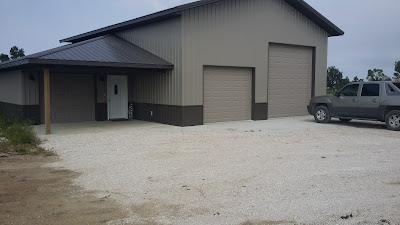 After a summer of lots of frustration, the IA place is finally coming together. Gravel in front, LP tank in, drainfield in, opening for dock to go into lake complete (needs bigger gravel), tile to drain lower part of property to lake and take the water from the gutters,  in!

The gutters are SUPPOSED to go on this Friday, the 2"+ rock for the base where the dock goes in is due tomorrow, more dirt is due next week. Still more to go, but after a LONG summer of delays and waiting, it is "getting close".

If you look at the album you can see the long kitchen counter now with 4 stools, stove, mwave, fridge, cabinets and see the door to the small bedroom. It is very liveable now.

2015 will go down as the summer we never got the dock in -- the thought was that the place would be ready by Mindy's Miles in June -- it is really as of today, August 26, that it finally became ACTUALLY "liveable". Projects in the real world with real weather and real contractors to not show up often fall behind schedule ... badly.

From the "wisdom of today", don't build, find something to buy -- but then of course, you never get exactly what you want. We did that twice, lots of money spent remodelling both times. The good thing about building is that  when you build you have no money left, so you have no temptation to remodel! ;-)

Hopefully as we slide into fall, some crisp nights with pretty sunsets over the water, then winter, with maybe some ice fishing, then the promise of spring, getting the dock in EARLY and hopefully actually enjoying the place a good deal next summer, it will all then seem completely like a great idea and the memories of the frustrations and sticker shocks of 2015 will be only dimly recalled.

I DO understand how I am SUPPOSED to think and feel! ... and sometimes I even do. I covered some of it in this post (some things don't look as "inevitable" as they did then, do they?). It's funny to look back at the bookends of "Pond Depression" and "Pond Elation" from the blog last year ...

If intellect drove emotion, rather than generally the other way around, I'd be completely confident that the "lake place" will become a place of joy and happiness as opposed to a frustrating money sink with endless work and added costs. Most likely it will -- but then, I have moments when the algae is growing in the pond or the water is murky, that I wonder about that as well.

Mooses just think too much! Perhaps a lobotomy is in order!
Posted by Bill at 4:25 PM