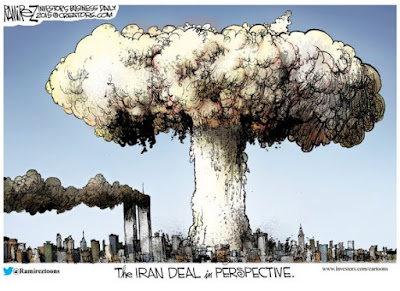 The linked column is a good one to read, I recommend it. Here are some thoughts it catalyzed for me.

Do we REALLY think that the results of the Iran "agreement" will be a mushroom cloud over NYC?  As the column points out, we certainly HOPE not, but then we never hoped for 9-11 either.

In  retrospect, might 9-11 have been predicted  / stopped? Certainly -- there were plenty of signs IN HINDSIGHT, and as I wrote about here  it was sort of a toss-up at the time in the MSM as to whether W or Reagan were just "responsible" for 9-11, or, according to something like 30% of Democrats at the peak ("Truthers"), the whole thing was an "inside job" pulled off by the dunce W and his own Dr Evil, Cheney.

If a teen takes to driving their motorcycle at night with no helmet while drinking excessively, do I really think that they are going to kill themselves? No, I again "hope not", but I realize it is a distinct possibility!

Being a "conservative" means that one is willing to look at possible negative outcomes. We all know that young people tend to be more liberal and at least gain SOME level of conservatism as they age. Today we see less of that since the left is so terribly dominant, and I'm convinced that many simply see no choice anymore -- they rely on government benefits, their AARP magazines tell them that "left is the only answer", and it becomes a "social issue" -- their kids and friends are lefties, they feel they have no choice. Besides, they feel like it is a sign of being "hopeful"!

While we hold out hope that we will see no mushroom cloud over Jerusalem of NYC, we DO already see Iran sending troops to Syria ... possibly that is the equivalent of our hypothetical drunk driving teen getting a DUI? The MSM is pretty much ignoring the Iranian troops -- the other problem with the left is that most of the people that start drinking the Kool Aide aren't even aware of a lot of what is happening. In case you didn't notice, the world is a lot less stable these days -- and we have a "deal" with one of the most destabilizing forces.

How did we get to 9-11? Complacency -- same way we got to BO, gigantic debt, bloated entitlement programs, wishful (hopeful) thinking, low percentage of people working, poor productivity, 42 million people living here not born here -- at least 11 million of them illegally, etc.

A teen driving a crotch rocket around drunk and high on weed is relatively rational and intelligent compared to BO and his foreign and domestic policies -- and one has to be some sort of a "looney" to think that anything "really bad" could result!

We can "hope" it isn't a mushroom cloud over one of our cities, but Iran doesn't need ICBMs to hit Israel! In the meantime, just watching the news makes one wonder how bad it has to get to call it "disaster"!