The Historical Hockey Stick of Capitalism

Perhaps the most powerful defense of market capitalism you will ever read - AEI | Pethokoukis Blog » AEIdeas: 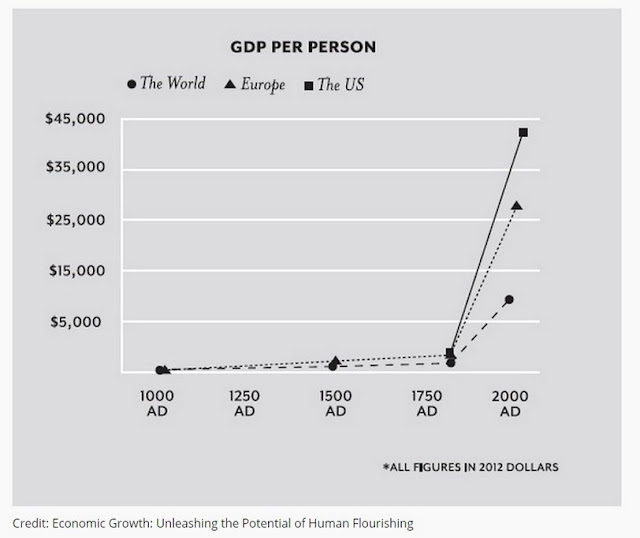 BS (Bernie Sanders) and the Pope gets thrown around making people believe that market capitalism is somehow "bad". The large point they totally forget is that if you want to spend a lot of time complaining about how vast wealth is distributed, you FIRST HAVE TO HAVE VAST WEALTH!

For most of history, 90%+ of people had NOTHING -- little or no shelter, regular hunger and often starvation. They didn't even IMAGINE "leisure goods", sports, travel, entertainment, etc. -- in fact, even the rulers could not have imagined the technological wealth of the common man today.

The reason for all this is Reading, Reformation, Revolution and Revaluation.
The effects of this DEcentralized  power and economics and the Market Economy (Capitalism) broke out the strongest and earliest in the US, then in Europe, and in just the last 30 years we have seen it reach Brazil, Russia, Indonesia, China (BRIC) and beyond ... causing the curve in GDP per capita in the graph.

It is really not surprising that the Pope thinks going back to the bad old days is a good idea. Perhaps he will move to restrict reading as well "for the good of all" -- best to have "those in the know" make all the decisions! The common man might get confused!

The motivations for BS are probably just the old human standards -- lust for power, envy of those who make more than he does, wishful thinking about how things might work if he was in charge and in his case, just being a cantankerous old coot.