Shrinking US, The Desert Classic In Syria 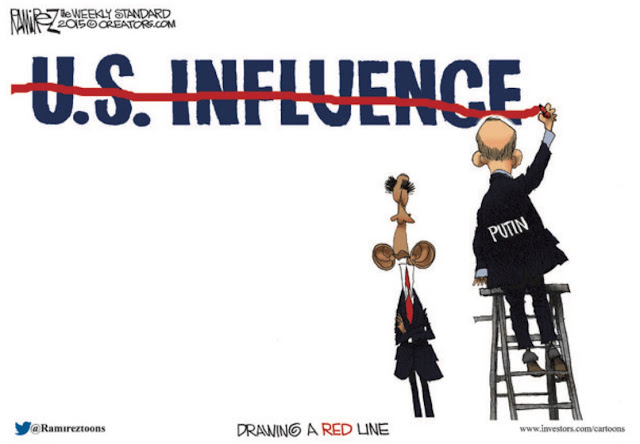 How many times did we see headlines hammering on any "failed" W foreign policy during the W administration?  Harry Reid said that Iraq was lost in April of 2007 even STILL, with BO screwing up on Iraq beyond the maximum anyone could imagine, it isn't completely lost even YET! This video needs to be etched in EVERYONE's MIND ... it is the "essence of BO".


But one thing we never lacked was extremely direct, if not completely insane and over the top criticism of every single move that the W administration made.  The press was totally energized -- casualties, territory losses, criticisms or challenges from foreign governments, accidents, costs -- the list was literally endless, and the drumbeat of criticism never ended. If the press treated both sides the same way, this would be appropriate for an "adversarial press" (perhaps with a bit less false and over the top reporting as per W years).

How different it is for BO. Here is a paragraph from the linked column ...


U.S. officials say they now believe the Russians have been directly targeting CIA-backed rebel groups that pose the most direct threat to Mr. Assad since the campaign began on Wednesday, both to firm up regime positions and to send a message to Mr. Obama’s administration.

There you have it ... just the facts, and pretty muted with very few headlines. BO established a policy that he claimed was a success in Yemen, it wasn't, and not only fails miserably in Syria, the Russians kill the few rump forces that policy trained just so everyone gets to see how truly hapless the US is. This is the moral equivalent of the Jimmuh Carter Desert Classic! America is destroyed at home and an object of derision on the world stage!

Does anybody remember BO snarkily telling Romney that "the 1980's want their foreign policy back"?

Is it petty to bring it up? SURE ... but really, just how many times did you see or hear "Mission Accomplished" ... the ship's banner, meaning the mission of the SHIP had been accomplished, but never the less, a meme that was used by the media to maximum advantage against W.

When the shoe is on the other foot, the story is MIA, even when it is completely true and it was BO's words and he really and snarkily meant it! Even in the right wing press doesn't come even close to the day by day cynical attack that W suffered under for 8 long years on issue after issue -- sometimes real, but in many cases fake.

It is insanely biased, but it is just the way it is.