Obama Gets a Clue? | Power Line: 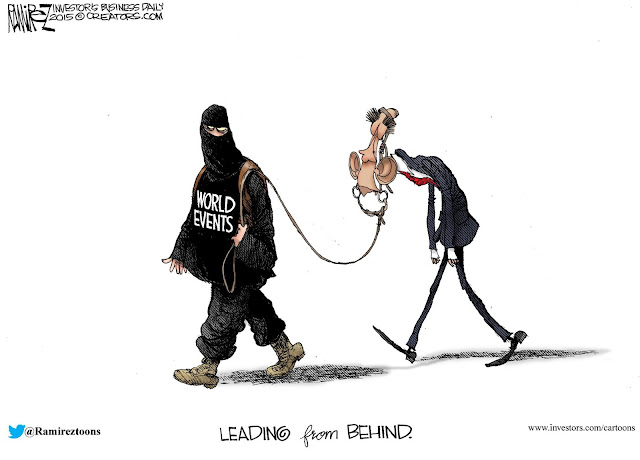 In the linked PL column there is the hope that BO's decision to more or less "stay the course" in Afghanistan constitutes his waking up and realizing what is happening in the world. Unlike the claim made for Carter in the column, I really don't expect BO to be reading Churchill any time soon. The PL guys do a good job of being hopeful.

How many times did we hear from say 2003 on that W had "taken his eye off the ball on Afghanistan"? Thousands at least.

BO tried to "lead from behind" (behind W) and attempt a "surge" in Afghanistan. His Afghanistan casualties exceeded 2x W's in 2014 . I covered how little of the deaths were reported here -- now we see how sadly this policy is failing in Afghanistan.

So the sacrifice we made in Afghanistan in lives and treasure is too precious to walk away from but Iraq wasn't? Am I the only one that would like to hear BO explain the logic of why THAT is??? If you look at the location of Iraq, Iran, Syria, Europe -- let alone Israel for those of us who care, WHY is it that Afghanistan is of greater strategic importance than Iraq? Obviously, it is not -- not that we ought to allow it to become a haven again, but Iraq is far more strategic.

Is it even possible for the MSM to sustain any criticism of BO? Iraq, Afghanistan, Libya, Egypt, Yemen, Crimea and Syria. Where is US foreign policy not a complete disaster? Nowhere -- it's a consistent disaster everywhere!

90% of the media is simply part and parcel of "The Party - Democrat" -- we may as well be the old USSR and call of "Pravda" (Russian for truth).