The linked column  is a good one, but I'm not going to talk about it much -- I'm stealing Mead's thesis and clothing it with somewhat different support. His thesis is that if BO and his Sheeple were REALLY the "caring, virtuous, brave, etc" folks that they are now proudly strutting about as, we would have seen a bit of evidence A LOT earlier! Remember this picture that I blogged on in March of 2014? What we see now is a distraction, that is taking us deeper into the destabilization of the whole planet, rather than "merely" the Middle East, North Africa and Europe. 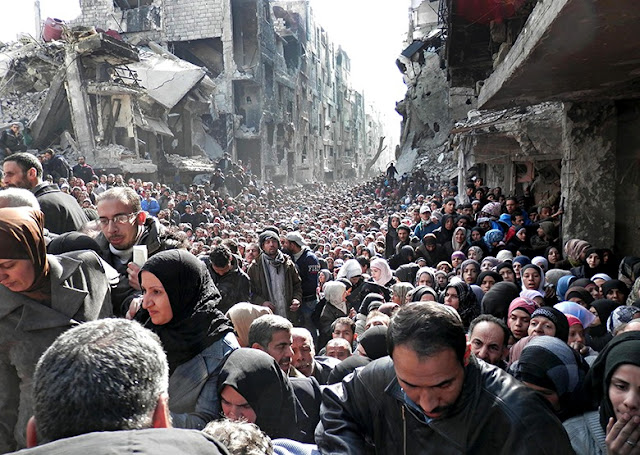 When your ideology is firmly based on hubris, then truth, reality, reason, common sense, etc all dissolve in the fog of rhetoric, propaganda, scapegoating and wishful thinking. Like the adult that "blames their parents" for their ills, the majority of the population behaves as fake adults who are really stuck in childhood, "blaming Bush", or "corporations", or "Capitalism" or some other bogeyman, while they ignore even the most basic of facts passing by their closed minds on a daily basis in favor of the utterances of their "messiah", now plainly fallen to all who retain any independence of thought.

The bulk of the US media however is still primarily in thrall to BO, so the number of people that might otherwise have figured out that this emperor is not just naked, but also either a raving lunatic or megalomaniac, is large!

Taking in 10K, a 100K, or even a million refugees from Syria at this late date is a laughable measure -- "pissing in the ocean" of a US and global foreign policy disaster on the scale of foreign policy mistakes that caused World Wars I and II. The idea of "having a discussion" about refugees is a smokescreen like discussing "saving" (slowing the rate of growth) a few tens of billions on a now nearly $20 TRILLION US debt. It is the equivalent of a magician's scantily clad assistant -- such diversions scream to free people that still retain independent thought to WAKE UP AND PAY ATTENTION!

Pulling the troops out of Iraq, destabilizing Libya, Egypt, Syria and giving $100 billion+ and the bomb to Iran are all part of either the most gross string of incompetence barely imaginable since at least the fall into WWI, or part of the plan of a madman intent on restructuring the world so that it is more "fair and equitable" to "proud Luo tribesmen from Kenya" (being "from Kenya" at least spiritually as stated by what he claims to be his own words ... assuming you can trust him on ANYTHING).

If anyone had any desire to help "ease the Syrian refugee crisis" they would have been setting up safe zones, feeding stations and driving back ISIS **LONG** ago. They would in fact never have pulled troops out of neighboring Iraq when Syria was already in chaos in 2011 due to the "Arab Spring". They would have had some sort of coherence relative to Assad.

To those of us that still use our minds, the spectacle of the very same people who wistfully pine away for the "peaceful, better days" when the glorious Saddam Hussein and his benevolent sons presided over a "much better" Iraq, now demanding petulantly that "Bashar Assad must go!" is surreal.

Again, the BASE of this whole charade is the idea that "It was W's fault". However, in December of 2011, Mr "If you like your healthcare you can keep it" said this:


It’s harder to end a war than begin one. Indeed, everything that American troops have done in Iraq -– all the fighting and all the dying, the bleeding and the building, and the training and the partnering -– all of it has led to this moment of success. Now, Iraq is not a perfect place. It has many challenges ahead. But we’re leaving behind a sovereign, stable and self-reliant Iraq, with a representative government that was elected by its people. We’re building a new partnership between our nations. And we are ending a war not with a final battle, but with a final march toward home.

Was he lying, or was he just wrong? With BO, those are really the only two choices nearly all the time. I don't know how any sane person can at this late date not wonder about which of those two options we are hearing every time he opens his arrogant trap.

We EITHER are witnessing a level of incompetence in the creation of regional and possibly global instability equal to or possibly greater than the descent into WWI, **OR** we are witnessing the acts of a madman intent on avenging the "dreams of his father" on a naive and willfully ignorant world.

Paris and an airliner in the last couple weeks. Mere snippets of the noxious fallout of the disaster that is BO.