Glenn Reynolds: Liberals have chosen The Donald as their 'Destructor':

For those unfamiliar with the reference ...

It's kind of funny for an old OO programmer ... a Destructor is a method that is automatically called when an object is destroyed ...

In this case, the "Object being destroyed" is what is left of the US ...


And there’s a lesson for our ruling class there: Calling Trump a fascist is a bit much (fascism, as Tom Wolfe once reported, is forever descending upon the United States, but somehow it always lands on Europe), but movements like fascism and communism get their start because the mechanisms of liberal democracy seem weak and ineffectual and dishonest. If you don’t want Trump — or, perhaps, some post-Trump figure who really is a fascist — to dominate things, you need to stop being weak and ineffectual and dishonest.

The closing is rather good ... it really all is. Recommended!


Hearing that Yale professor Erika Christakis won't be teaching at Yale because of the abuse she received over a respectful but non-PC email, former DNC chair Howard Dean tweeted: “Free speech is good. Respecting others is better.” To his credit, CNN’s Jake Tapper responded: “Of course only one of them is enshrined in the Constitution.”

But Twitter humorist IowaHawk had the last word: ”With the exception of POTUS, the Atty General, both leading presidential candidates, the media, and universities, Americans love free speech.”

If you wish to hold fascism, or even just Trumpism, at bay, then we need elites who are trustworthy, who can be counted on to protect the country, and who respect the Constitution even when it gets in the way of doing something they want to do. By failing to live up to these standards, they have chosen their "Destructor." Let’s hope that they haven’t chosen ours, as well. 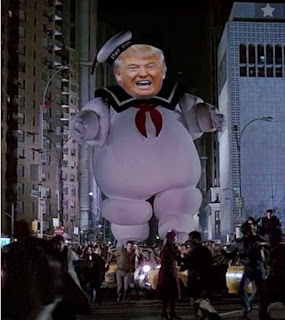