We have been admonished a good deal the past week to be VERY careful about what is said about Muslims.  The following graphic gives an interesting view of Hate Crime statistics, at least as gathered by the FBI in the US. 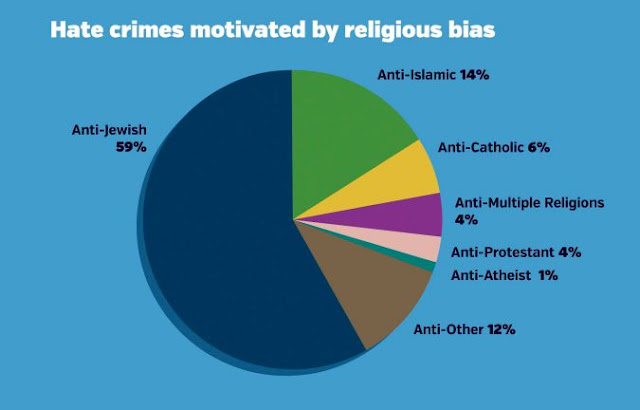 Strangely, at least in 2014, Hate Crimes against JEWS led by a WIDE margin with basically 60%!!

Anyone hear BO chiding the US to be less hatful of Jews? ... No, I didn't either.

Also, if you add "Catholic", "Anti-Protestant" (I wonder if the "Hate Crimes" against Catholics are non "anti"???), plus "Anti-Multiple Religions", you get 14% ... same as anti-Islamic.

I'm not really interested in digging into this a lot, but since there is yet another category for "anti-other", when the whole chart is purported to be Hate Crimes due to "religion", can we surmise that "anti-multiple" is actually throwing the rest of "Christian" into a bucket, or is Christianity ALL "Protestant or Catholic"? Could be, but anyway, there as AT LEAST 10% against Christians, which is pretty darned amazing when you realize that the US was once a "Christian nation"!

(it is gratifying to see the big 1% applied to Atheism as a "religion" ... it is, but a lot of Atheists are unhappy with that).

This is from a pro-Jewish source -- something in itself which "The Party" (D) tends to take with MORE than a grain of salt, as opposed to say from an "Islamic source", which is pretty much treated in TP and the media as gospel -- "racist" or "Islamophobic" to think otherwise!

When TP and the media are merrily manipulating us, what they DON'T talk about is very often even more important to be aware of than what they do.