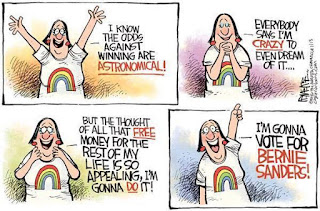 You can go off and read the reasons if you like ... I have a few in the same vein that if I cease to be reality based, I could proffer as my platform ...

1) I believe that white teens should be able to walk through black neighborhoods late at night, drunk, carrying large amounts of cash in complete safety.

5). I believe that everyone should vote early and often with no identification required.

6). I think we should pay students to attend free universities for as long as they like with no grades and pay for it with money -- prettier money, printed on colorful paper with a lot of unicorns on it!

7), I support mandatory voting for EVERYONE! If you don't vote, you go to a special camp where they convince you to vote! Coupled with #5, we should have turnouts in the 300-700% range!

8). I think everything should be free. Healthcare, nursing home care, housecleaning, lawn mowing, booze, drugs, Internet, Cable TV, movies, sports, masonry  ... It should ALL be FREE!

9). I'd filibuster FOREVER for having no taxes paid by anyone in the 99% ... have the 1% pay it ALL and just print the rest! Now that I think of it, this seems like a BASIC RIGHT! Oh, and make the money more colorful and prettier -- with unicorns.

11). A Trillion? Why so little? I raise him double and add $30 Trillion! oh, and I would demand that we get most of the work done by disabled ex-con MINORITY veterans that are addicted to at least alcohol and one other substance and are unsure of their gender! Take THAT BS!

13). EVERYONE should be paid equally! Men, women, children, pets, undocumented Democrats ... EVERYONE IS EQUAL! ... It's a BASIC RIGHT!

14). Why limit funding for any great idea? Planned Parenthood? UNLIMITED FUNDING! When people have ideas of things that they want, those are the things they want!

15). Why would anyone limit family leave, vacation days, sick leave, etc? Everyone gets UNLIMITED PAID LEAVE! ... for whatever they want! Can't Bill Gates or Warren Buffet take time off whenever they want for whatever reason they want? Why the hell should they have an advantage over anyone else? See 13  ... being off work tends to cost more. Everyone gets unlimited leave AND double salary while on leave!

16). Why have any campaign grovel for donations? All campaigns are FULLY FUNDED! No more grubby "donations"!

17). Coach? Why should ANYONE fly coach? Anyone that wants to fly anywhere flies on the best private jets! Why limit ourselves? See 13.

18). Banks? Why bother with banks? In my administration everything is free and everyone makes gigantic salaries. Sure, we can have a lot of "regulators" as an excuse for paying more gigantic salaries, but you don't really expect them to waste time looking at boring records full of columns of figures in a nation where everything is free and everyone is RICH do you? I didn't think so.

19). Gay rights? Hey, there are over 50 genders on Facebook and incalculable sexual preferences -- every one of them is to be "special, protected, subsidized, celebrated, honored, etc" in my administration. We will have special days for all of them with big parades pretty much every day of the year! Imagine the joy of "National uncertain genders attracted to imaginary species day"! A great excuse to produce a bunch of free T-shirts and party favors!

20). I got into politics because I was sick of everything not being PERFECT!

21). There was an invasion in 2003? Bummer!  I oppose all war back to Sumer vs Elam in 2700 BC (first documented war)! My first act as President would be to outlaw War for all of time ... retroactively!

22). While I oppose war, I love veterans. In my administration anything to do with Veterans will have UNLIMITED FUNDING!

23). Oh, I love the Iran deal. I propose we "DECLARE PEACE"! ... with everyone! On second thought, this is redundant since I have already declared war illegal -- SO, I "DECLARE LOVE!" ... all people everywhere will LOVE EVERYONE!  Why didn't we do this before?

24). Here today I declare that the CLIMATE WILL NOT CHANGE if I am elected! Not now, not EVER! This is it! ... unless you want it turned down a few tenths or something. I declare that all energy will henceforth be free, completely non-polluting and like my budgets, UNLIMITED! I'm forming a task force so that everyone can have the weather they want every day!

25). "Immigrants"? Isn't that kind of exclusive? Executive orders? I'm sick of all this -- on my first day in office I will send Congress home! It will be dissolved! Our borders will be  COMPLETELY OPEN !  No more politics! What we will have is PERFECTION -- I came to abolish politics.

I guess I really like politics after all. In a world free of want and war where everyone not only has everything, but loves everyone, we will all live happily ever after. For CERTAIN!

It is always a mystery to me why intelligent guys like BS with obviously intelligent supporters stop so far short of getting to what they and we all REALLY WANT!

It's simple, PERFECTION IS A BASIC RIGHT!!