I sincerely hope that this meme was put up by somebody just having fun rather than being serious, but it is certainly going around. 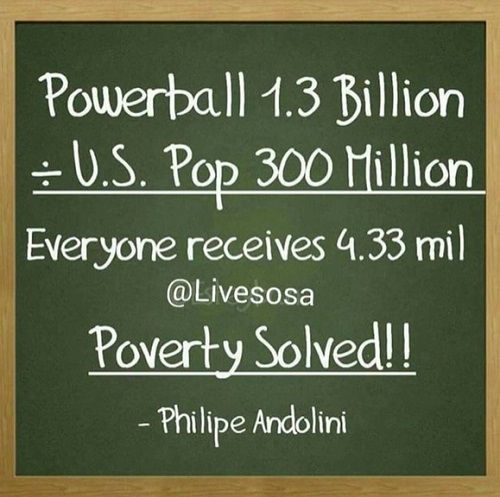 What is REALLY scary is that if you DID get $4 MILLION as a young person and decided to "live off the interest" from an FDIC account you would get LESS than 1% ... so < $10K per million, or a total of $40K a year -- less than the median income! Talk about "living like a millionaire"!

So most of us have a lot of money in market index funds and bonds. To the extent that the "BO economy" has done ANYTHING the past 7 years, it has pumped up those funds with a lot of freshly printed money. Take a look at China, take a look at the stock market so far this year -- or go back and look at 2009. You can do MUCH worse than a 1% return on your money!

Royal Bank of Scotland says to sell everything! Are they right?

Walter Russel Mead has some sobering coverage of what is going on in China. He believes that the reason that we see the commodity market crash is that China is already trying to do what the US did in the 1980's ... move from a manufacturing economy to a service / knowledge / financial economy.

As I've said a number of times, the "bottom bottom" line is always the same -- the MAJORITY of the population has to be involved in MAKING (building, inventing, manufacturing, writing, growing, producing, etc) something that OTHERS WANT TO BUY.

AND ... in order to continue to be prosperous, INVESTING a significant portion of the value of that production in SOMETHING THAT GOES UP IN VALUE!

Taking stuff out of some peoples pockets and putting it in other peoples pockets, printing money, giving speeches, passing laws, "regulating",  having "programs", etc serve the same function as the scantily clad magicians assistant. They draw your attention so the house (government) can fleece you a bit more while the ship sinks.

The top linked article closes with the following and some of the problem is simply that "millions and billions" are just too large for the human brain to deal with ... let alone trillions and if you combine debt and unfunded entitlements, approaching 100 Trillion!


There's a relevant Richard Feynman quotes about big numbers. "There are 1011 stars in the galaxy," Feynman once said. "That used to be a huge number. But it's only a hundred billion. It's less than the national deficit! We used to call them astronomical numbers. Now we should call them economical numbers." That was at least three decades ago—the annual deficit is at about a trillion now.

People have trouble conceptualizing numbers as big as a thousand, let alone a million, billion, or trillion. They listen to Bernie Sanders and come to the conclusion if only government took more money from "billionaires" it could fund everything for everyone. Appeals to reason and math are discounted as right-wing propaganda.

Let's face it, any appeal to reality is "right wing propaganda" these days!