As if Trump needed any lessons on how to get his name in the WaPo. 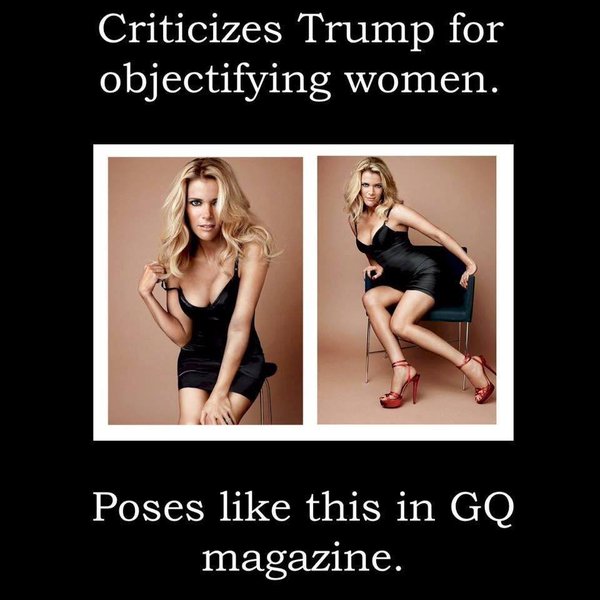 The WaPo is all bent out of shape about Trump posting and commenting on these pictures. They do at least mention for example the Scott Brown modeling pictures which the MSM had NO PROBLEM putting up all over when they were supporting Fauxahontis Warren! Kelly posed for those pictures and was paid to pose for them, as did Brown -- seems to me that people can judge what they think those pictures do for her credibility on their own! Or is there supposed to be a double standard for women as well as Democrats?

They are very worried about what "foreign leaders will think" about Trump's "attitude toward women". Really? After ALL the Clinton years???? How stupidly biased can you be? Foreign leaders knew EXACTLY what Slick liked -- big hair and oral sex. Didn't we ALL get to find out ALL SORTS of details about that over and over and ... ???

Oh, did you ever read any MSM article on how they worried about what "foreign leaders" thought of that? No, in fact, they tended to report that "foreign leaders don't understand why we care about how he treats women". "Feminists" where FINE with it, as were "journalists" ... one female Time reporter even gushed that "she would be HAPPY to give him oral sex just to thank him"!

Is Trump tacky? Sure, but compared to THE CLINTON'S???? The tawdry population of this area of N America gave up ANY STANDARDS when we let that slimeball keep on ejaculating in the oval office!

We could go to BO's "Dreams From My Father" where he very presidentially says "gotta have pussy", uses the N-word a few times, talks about "booze, weed and blow but no horse (heroin)" and a few other very "down to earth" things like "filtering his mom's white blood out" ... **NO PROBLEM** !!!!  I guess I forgot the big "D" next to his name and Slicks as well -- totally different!

No, I don't like Trump, but SERIOUSLY???? The MSM expects us to get all bent out of shape about HIS antics, when we have been asked to completely look the other way in the past constantly for the Ds?

It certainly isn't hard to understand how the Donald's supporters are ANGRY and support him MORE when the MSM goes after him!
Posted by Bill at 9:23 PM