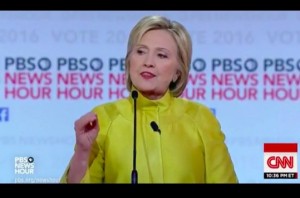 So she wore the same top to go speak to Goldman Sachs. Is this like her SELECTING a bunch of e-mails off her server, claiming that NONE contained anything secret, and then having like 40 show up as TOP SECRET?

Is this the criminal returning to the scene of the crime to get caught, or is the the addicted shoplifter that just wants to pull it off again for the thrill?

I'm assuming that she IS a woman and is actually a mother. Given that, having been around women and having lived with one for over 30 years, are we to believe she pays no attention to what she is wearing when she goes on a nationally televised debate? I mean, she keeps claiming that women HAVE to vote for her, and Madeleine Albright even claims they will "go to hell" if they don't support Hillary! Is not paying attention to what you are wearing something a woman does?

So that outfit looks like: a). Something done by Kim Jong's tailor that he refused to wear.  b). Something worn by a low budget humanoid alien on Star Trek c). Stolen from Austin Powers "Goldmember" wardrobe.

Add to it that she wore it to Goldman Sachs, which gave her $640K, and doesn't it HAVE to mean something? I mean, if a woman pulls out an unusual outfit that you have only seen her in once, doesn't she ALWAYS have a message?

My view ... she is letting us know she is lesbian and "wears the pants".

Email ThisBlogThis!Share to TwitterShare to FacebookShare to Pinterest
Labels: satire