Mostly just posting to have these charts in one place for future reference.

Young Earth Creationists tend to put the age of the earth at 6-10K years.

Compared to them, our current warmists are like fruit flies compared to elephants! In order to reach their "scientific conclusions", they restrict their data to AT MOST 155-160 years (1860 to now), and in many cases MUCH less ... like "since 1979" for satellite data.

The linked article is short and has three excellent charts to give a little perspective. A scientist would take 160 years of climate data next to 100's of thousands of years ( I find the "billions" to be spurious, no real climate data available on those ranges) is far MORE laughable than your typical scientist likes to consider Young Earth Creation!

They want to show a "trend" on a couple hundred year scale when they have data from thousands, tens of thousands and hundreds of thousands of years to answer for?

Here is the last 10K years of climate data, in GENERAL it has been getting warmer, seas have been rising and C02 levels have been getting higher that whole time. That is what it means to be in one of the 5 "interglacials" in the last 500K years. If you wanted to point out something "scientific" rather than political, the fact that the peaks of warmth seem to be getting lower and the length of the cold periods getting longer MIGHT give a bit of a pause if you also looked at the 500K data. 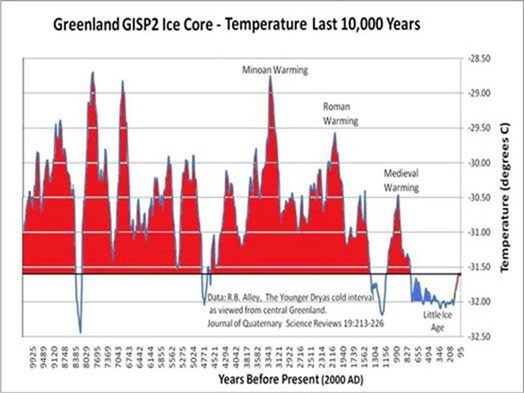 The following chart is the last 500K data of Vostok data ... the fact that the last 10K shows that while it HAS been getting warmer since the "little ice age", we are only in a "warm period" relative to that cool period ... which is why "climate scientists" talk "avg temp vs baseline" ... the "baseline" is 1981 - 2010.  (Gee, I wonder why they picked THAT?)

At least Young Earth Creationists COMPLETELY admit that they are acting with religion in mind -- but hey, at least it is an OLD religion! The Climate Faith is at best only been holding worship services since 1980!