Newt On Trump, A Little Reality

It's very much worth just going off and reading this -- it is entertaining and insightful. I've always liked Newt relative to his intellectual grounding and quick wit. Yes, yes, I realize he is far from a moral paragon especially relative to women. King David actually wasn't either, and he was a "man after God's own heart" (I Samuel 13:14).

Didn’t you write your Ph.D. thesis on the Belgian Congo?


I did, and I wrote my master’s thesis on Japanese and Russian railroad construction in the 19th century.

So why are you bashing people with Ph.D.s?


Because I have been in the real world, doing real things, and I understand the limitations of academic knowledge. I think it’s greatly overrated.

Look, you read a lot of books about how the world works, you are an educated person, you care about policy. When you hear Trump address subjects like NATO, it doesn’t worry you—

I'm a country bumpkin from Northern Wisconsin, but I consistently find people trying to show that they are intelligent by how well they can parrot "the standard narrative".  Really? If it is the "standard narrative" isn't it by definition something that is understood by those of "average intelligence",  if not less than average? As Paul Harvey used to say, what's "The rest of the story?!".

I want to get back to what Trump is doing, and we both know he is playing on impulses
—No, no we don’t.

We don’t?
What we know is that Trump has had the nerve to raise questions in a clear language because he represents the millions of Americans who are sick and tired of being told that they have to be guilt-ridden and keep their mouth shut.


So why are Trump’s negatives so high, if he is giving a voice to the masses?Look, Trump has been campaigning in a Republican primary with harsh language and has been routinely attacked by the elite media as much as they can. Reagan went through the same cycle. Do you know how many points Reagan was behind Carter in March?

Is there really nothing that worries you about this guy? The way he deals with reporters, his campaign manager, etc.? You are not at all worried he has authoritarian tendencies?
No. No. [Laughs.] Which part of that is supposed to bother me?


We ALL have very selective memories -- Moose memories are just less selective because we don't have the intellectual capacity to do as good a selection as others -- and even worse, we tend to not want to just remember what everyone else does.

Reagan was WAY behind -- NPR was CERTAIN he could not win right up to 5:30 or 6PM Central on election day when I was driving home from work listening and NBC called the election for Reagan. Listening to NPR you would have thought that Christ had just returned and informed them that killing babies in a mothers womb was a sin!

Just as they likely would then, they referred to a "poll of their listeners" taken that day that they were POSITIVE was "representative" that showed Carter winning with 75% of the vote, so they were able to completely discount the "obviously wrong" NBC call! As people at CBS HQ in New York commented, "It couldn't be true, we don't  know ANYONE that voted for Reagan"!!

That is the sort of brilliance that a PHD will give you if you are not careful.

Oh ... the MSM didn't enjoy it very much when Newt was elected Speaker of the House. Try to even imagine a major US media source attacking BO before he even took office at this level! 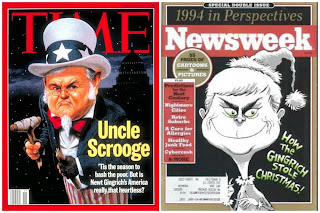