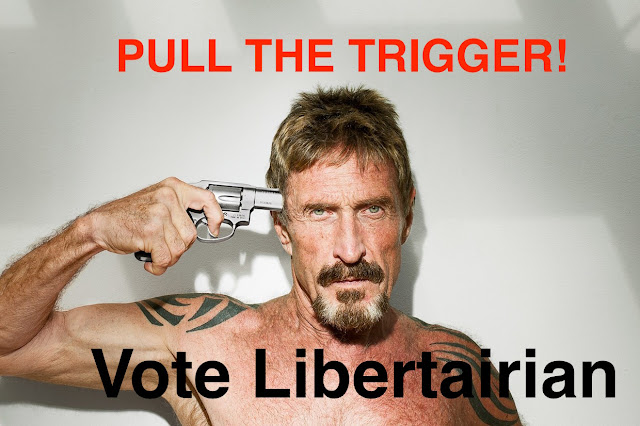 It's important to realize that the 3rd party people are not all a bunch of cranks! They have level headed thinkers like Zoltan of the Transhumanist Party, who has a lot of well reasoned thought of exactly the kind you can hear from 3rd party people nearly every day -- sometimes MULTIPLE TIMES A DAY if you have a wide enough circle on Facebook!

LOTS of times ... and point out how YOU should be one too! They make street corner preachers and Mexican hawkers look shy by comparison.

For those of you not up on the intricacies of transhumanism, here is their party platform:

In addition to upholding American values, prosperity, and security, the three primary goals of my political agenda are as follows:

1) Attempt to do everything possible to make it so this country’s amazing scientists and technologists have resources to overcome human death and aging within 15-20 years—a goal an increasing number of leading scientists think is reachable.

2) Create a cultural mindset in America that embracing and producing radical technology and science is in the best interest of our nation and species.

3) Create national and global safeguards and programs that protect people against abusive technology and other possible planetary perils we might face as we transition into the transhumanist era.

A lot of third party thinkers primarily thrive on abusing the 95% of people that think mundane problems like 19T in debt, unfunded liabilities of 120T, less and less people working, more and more on the dole, and Americans dying of substance abuse and suicide in droves and the rape of the Constitution are of passing interest. How boring.

Guys like Zoltan are more positive -- for starters, ending human aging and death in 15-20 years, probably in the morning! So far, it isn't "97% of scientists" like Global Warming on this bandwagon, just an  "increasing number". But hey, wouldn't you want to live forever even if the temp went up a degree or two?  I've written on this kind of technical positivity before, Zoltan is not alone ... See Singularity.

I found the following paragraph to be especially "3rd partyish":

Personally, I despise the Two-Party system in our country. It’s completely un-American, and is just another form of monopoly—except with two heads ruling instead of one. To help fight it, we should embrace explosive personalities who can destroy a political system that favors big money and special interests—neither of which Sanders, Trump, or McAfee need or are beholden to.

Come November, the race will likely come down to Trump and Clinton, but the real winner might be the growing Libertarian Party—and by implication, other Third parties—by putting forth a loud personality who can get America cheering in a very different way. That is progress, indeed.

I'm sure that Zoltan despises death and aging as well, and don't we ALL despise "big money and special interests"? Well, special interests other than our own of course!  ... and were we to come into some "big money", I'm guessing that the more honest among us might not despise that as much anymore either!

But he DOES have a point, which is actually the one that 3rd party people are ALWAYS, incessantly, constantly ... oh well, you get the idea ---- making.

We have to do SOMETHING different!

Any weirdo put forward by one of the existing parties is inherently NOT DIFFERENT ENOUGH! For most 3rd partiers, the difference of a Trump or a Sanders is lost because ... well, they are NOT A THIRD PARTY CANDIDATE ... ergo, "not different"! It's kind of like sporting a mohawk, a bone in your nose and maybe horns screwed into your head. Don't you get it??? I'm DIFFERENT!!!!!!

However, Zoltan is way more specific than your typical 3rd partier. He realizes that 3rd parties have a LOOOOOOOONNNGGG tradition in America of LOSING -- by A LOT! Like the "good ones" maybe pick up low single digits of the vote. So, Zoltan wants to ACTUALLY do something different -- he isn't a stick in the mud like other 3rd partiers that want to just run "Gary Johnson" again.

Last time out, Gary picked up .99% of the vote, more than the other 3rd partiers combined, and the most for a 3rd party since 2000! Talk about "making a difference"! Why 95-99% of the people remain so stupid as to not see the significance of .99% of the vote is something a 3rd party person will NEVER understand.

Well, Zoltan thinks John McAfee would be the kind of excitement needed to maybe BREAK 1%!!!!

My view is what they REALLY need is "McAfee - Zoltan" --- I even did their campaign poster for them!

I think the McAfee poster at the top of the post would be something that BOTH the Republican and Democrat establishments would seriously consider if it looks like Trump is winning -- which I guess just goes to prove that "both parties are the same"!

Email ThisBlogThis!Share to TwitterShare to FacebookShare to Pinterest
Labels: politics