I was dating someone whose dad worked at GM in Janesville and made close to $50K, REALLY good cash in those days, her brother started on the line at $20K with a full month and 1/2 of vacation about the same time I did. I got two weeks -- the benefits were better at GM than at IBM in those days.

A teacher at Barron made about $12K in the early '70s when I was considering teaching as one of the options for a career. A number of them were married to other teachers and had a small home in Barron and a small lake place on Silver Lake about 40 min north. Times were pretty decent, and with the election of Regan in '80, they got a lot better.

Things were just starting to really go berserk in '78 -- prices would shoot up and taxes would shoot up even worse. I remember one great raise I got of something like $50 a week that moved me a bracket or so and I got all of $5 in actual take home pay. Inflation would push 20% and eventually, interest would exceed 20%.

According to this calculator, $1 in 1978  worth $3.81 today, so I REALLY started at $15,500 x 3.81, or $59,036 in todays dollars. Todays programmers are basically identical given inflation. The GM worker starting at $20K was making the equivalent of $76K today, so starting manufacturing workers are doing WAY WORSE. The $12K teacher would be doing $46K in todays dollars -- so teachers are doing about the same as well as programmers.

If the $10K corvette had just inflated, it would cost $38K today rather than $60K. The starting auto worker gets less than 1/2, and even the experienced worker would be getting $190K today if they had kept pace with inflation! Yet, the price of the car -- with materials costs down, automation supposedly saving money and WAY less labor input in both cost and actual hours has risen in relative value far beyond inflation!

But let's face it, none of the above really feel that they are doing better today than we did in 1978!!

We sure as hell felt we were doing better in 1988, and even 1998 in many cases, but certainly not today!

So what happened? I'm really not all that sure, but I'll throw out some thinking:

A lot of government taxation and spending has been increasingly hidden at the state and local levels due to "Federal Grant In Aid". 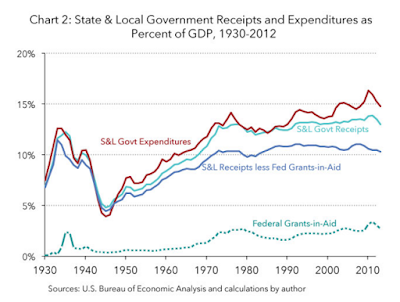 Add this together with increased Federal spending and you get the following. 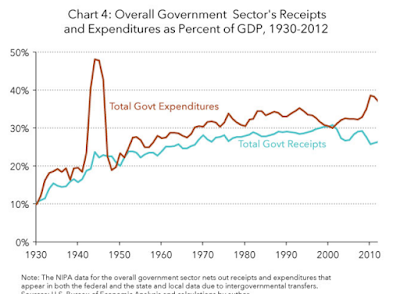 Remember, this chart is RELATIVE TO GDP ... so when we are doing well economically, our spending can be high without increasing the % of GDP much if at all. WWII and BO are the big events. From the '90s to BO we can see the relative prosperity, and then the disaster of BO struck!

Certainly, for manufacturing things went bad starting in the '80s, but neither teachers or programmers as examples are ACTUALLY keeping pace with inflation because the numbers are cooked. We can see it is bad, yet it is WORSE than that and all we are being told is "the rich make too much".

This is not one of those blogs that I feel satisfied with -- "work in progress". I feel like there is a lot more truth hiding in plain sight here, but I'm not seeing it yet. Later.
Posted by Bill at 9:07 PM