57 One Way Streets To Perdition

I've covered at least very nearly all of these, but the litany is important, I highly recommend reading it. As you read the following paragraph, context is important -- the ex-wife of the person BO was running against (Jack Ryan) was 7 of 9 ... Jeri Ryan. Men have done strange things when involved with even less good looking women. 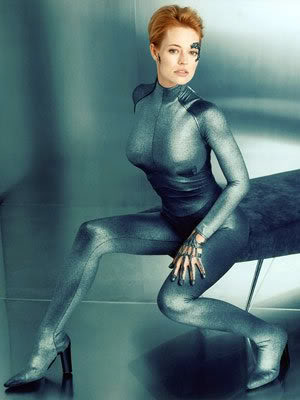 In Obama’s 2004 race for the U.S. Senate – which was the springboard a mere 105 “Present” votes later for his Presidential campaign – first his primary opponent’s, then his general election opponent’s SEALED divorce records were broken into and unsealed. In one case, some extremely minor mutual push-and-shove “abuse” and, in the second, some consensual but embarrassing sexual hijinks spilled out into the world. Obama prevailed. What are the chances that someone could catch such a lucky break? Twice?


I'm with Ammo Grrril on  the basic reason that BO's records all need to be sealed.

I’ll tell you what I think: I think he got into college as a foreign student, one born in Africa and raised in Indonesia. I’m not a “birther.” I do not believe he was born in Africa. I believe he was, in fact, born in Hawaii. But I believe Obama is the original “birther”; he lied and said he was born in Africa to get into college, just as he did in the bio his booking agency used. A bio he let stand for 18 years, uncorrected. I also think the old Choom Gang slacker had mediocre grades. And I’d bet my favorite gun that every lawyer on Power Line kicked his ass on the LSAT. Prove me wrong, Barry. Let’s see the records.

The book bio factoid above is absolutely true -- but of course, nobody cares. We are on a lot of one way streets and BO is a Democrat. Nuff said! Good God, Hillary Clinton is running for for president and Mr blue stain is still around! We live in a world where well over 50% of the population is purely following the script laid down by The Party and it's media / propaganda arm.


Nothing but One-Way Streets. No wonder we’re on the road to perdition and can’t even make a U-Turn.