This meme has popped up enough on the web that I went to check Snopes. The picture is photoshopped, but the women are who they are labeled. Left to Right, Princess Letizia of Spain, French first lady Carla Bruni, and Mooch Obama. 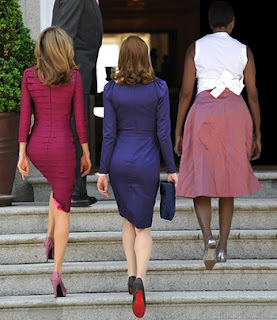 The press enjoyed making fun of Ben Carson's wife's appearance. They naturally didn't enjoy Trump doing a comparison between his wife and Cruz's. So it goes.

The US sheep generally need to be fed a steady diet of propaganda that paints Europeans as "sophisticated, intelligent, discerning, etc" and at least most of the US, certainly the Red State swine, as well, swine.

Strangely, one of the "sophisticated, intelligent, discerning" things those wonderful Europeans do is "compare wives physical features".


Comparing the physical attractiveness and fashion style of the spouses of national leaders is common fodder for gossip magazines and newspaper columns, particularly in Europe.

I think we all knew that. The French didn't love Jackie Kennedy because of her great mind. Interestingly, one of the former lovers of Carla Bruni is supposed to be Donald Trump -- along with Mick Jagger, Eric Clapton and many others. Let's face it, once "virtue" is out, it is OUT!

We can be thankful at least that there is no chance of a "Pippa Incident" breaking the internet when Mooch walks down the street! It is also gratifying to know she is probably able to save valuable personal time by not lecturing the first ladies of Spain or France on their diet or exercise regime! (American school children are not so lucky!).

Is it "tacky" to compare how wives look? Sure, but it certainly is done -- apparently more in Europe, but plenty here as well. Is it "tacky" to make fun of NJ Gov Chris Christie's weight in a country where men and women are asserted to be equal? "Standards" are a very funny thing in a nation where there are no standards ... Outside of what THE PARTY DEMANDS of course, Heil BO and goose-step to the lavatory you feel most comfortable in today!

I'm actually glad that the press ISN'T making a bunch of sport of Mooch vs the "Ferrari's". It is hard to imagine if there was an R first lady who forced little kids to have sawdust and gruel for lunch to "keep their weight down" that there MIGHT not be a couple teensy weeny and RARE (oh so rare!) jokes don't you think?

Nah, we have an unbiased press and Europeans are just so mature and sophisticated.