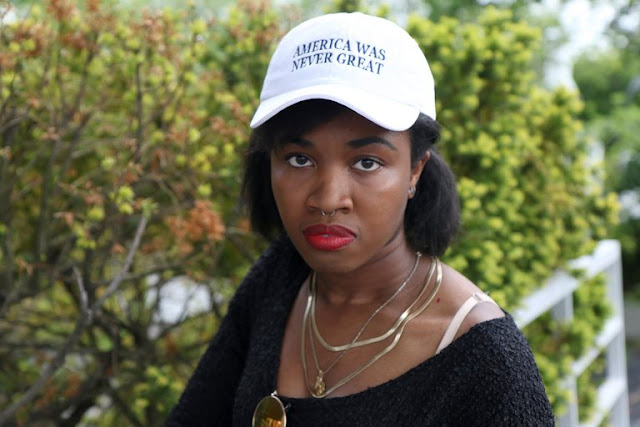 The NY Times naturally presents this as a "free speech" issue. The woman has received some "threats on the internet" -- ho hum.  Not supporting gay "marriage", men in women's bathrooms or saying "all lives matter" is good enough to get one at least internet death threats in this time of incivility, boycotts, and loss of jobs for non-PC speech. Meanwhile our tender college students demand to not even hear the name "Trump", nor see it chalked on sidewalks.

The pictured young woman expects to graduate in a couple of weeks and is seeking a career in media,  I know it is the most egregious of cynicism to even suggest that wearing such a hat and getting covered in the NY Times might be an asset to such a career.

She said she was set to graduate in two weeks with a degree in media studies from the College of Staten Island and wanted to pursue a career in music, radio, social media or journalism. She has already started looking for jobs in those fields.
As for the custom-made cap, Ms. Lake said she had ordered only one but planned to buy many more.


We know of the long list of terrible sins against the secular god of Political Correctness that may not be uttered or even alluded to lest someone be offended. But how WOULD someone have a "nation" these days? Back in 2008, Michelle Obama was for the first time "proud of America" -- but only because she saw it stepping up to be "Fundamentally Changed".

It has been, and now we live in BOistan -- and nobody ought take offense at a hat saying that "America was Never Great".  They may have fought for that never great nation, possibly have been wounded and still bear many scars, but their view is wrong and to be offended by such a hat is WAY outside the bounds of what is now allowable in this territory.

There is  LOTS of right to take offense at a Confederate Flag, somebody saying "All Lives Matter", a person objecting to a man in a wig and a dress (or apparently just "feeling girlish")  entering a woman's changing room with their 12 year old daughter however -- in fact, the Totalitarian State of BOistan may well prosecute for "Hate Speech" if they step out of line and transgress these disallowed types of speech.

Yes, Trump has all sorts of flaws, but look at the hat and read the article.

This election is about "Is BOistan Great"?

If you vote for Hildebeast, or stay home, you are voting for speech like this blog to suppressed.

In BOistan as advanced by the Hildebeast, there will soon no longer be dissension -- we are RAPIDLY getting to the point where all MUST agree with whatever edicts the head of "The Party" chooses to hand down, and the "Bitter Clingers" will shut up or disappear!