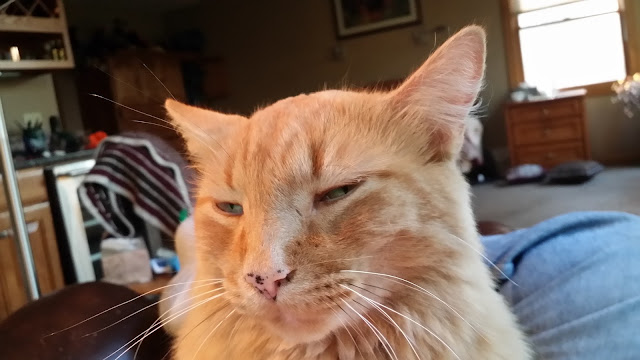 This is "Cabbage", a poor kitty who had to be re-adopted from our son when his life situation changed. We call him "Cab" for short, but I typically call him "The Ferocious Cabadocious" because he still retains a tendency to suddenly bite or claw out of the blue while you are petting him. He has a complex personality, he can also be a real lover.

He has also become the "traveling kitty". He likes to sit on my knee right next to the drivers window as we are going to IA and back to watch the other vehicles -- he gets excited when we pass someone and gets unhappy when we are passed, although that behavior has settled down as he has gotten more used to road travel.

He tagged along last Friday - Saturday as we headed to IA and back to enjoy the cold and rainy weather with a view of the lake. About 10 min into the trip back on Saturday PM, the one side of the tailgate on our trailer popped off and drug in the pavement, so we had to pull over. A pin had come out, so we took care of that and went back to get going and .... the Avalanche was locked!

See, Cab likes to press the buttons on the armrest on the drivers side, when I'm driving I have to watch if he gets over there and cover up the buttons, or a window will soon go down at 75mph on I-90. The vehicle was running in park, Marla's purse was inside, and we were sunk. We coaxed him up to the drivers armrest position, but after about 10 min or trying to randomly get him to move around by waving at him and tapping on the window to press the lock button again, we were calling a locksmith.

I'm sure we looked like idiots as well, but Kitty Lock Fever tends to cause that.

Suddenly, while Marla was looking for a locksmith,  I noticed him heading toward the back seat passenger side and realized that he had opened that window! I got around to intercept him and Marla was able to crawl in with some help and save the day -- not all that dignified, but saved!

Thus ends the story of Kitty Lock Fever -- a story which will no doubt make Cab immortal in Kitty fame at our place for years to come!
Posted by Bill at 8:54 PM