A former president of the U.N. General Assembly awaiting trial in a bribery scandal died in a weightlifting accident when a barbell he was lifting from a bench dropped on his neck, an autopsy revealed Thursday.

Maybe Ng figured all that stateside fuss about the Clintons was forgotten when he made a series of brief trips to New York with suitcases of cash on a total of 10 occasions between July 12, 2013, and July 5 of this year. The amounts ranged from $200,000 to $900,000, for a total in excess of $4.5 million.

The UN official being John Ashe, one-time president of the General Assembly and still the permanent representative from Antigua and Barbuda.


Here is Ng in happier times with one of "his folks". 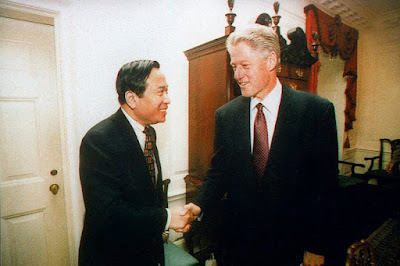 Nothing up here folks ... "what does it matter now anyway?". No question it was all a "simple accident" -- be VERY careful if you are going to testify in the vicinity of the Clinton's!